Fricassée is a French dish but that doesn’t mean Brazilians can’t have their own version — a much simplified and quicker version, transformed into a complete “one pot” meal. Busy or not, you must try this Brazilian chicken fricassée (fricassé de frango) — which is topped with shoestring potatoes! 😉 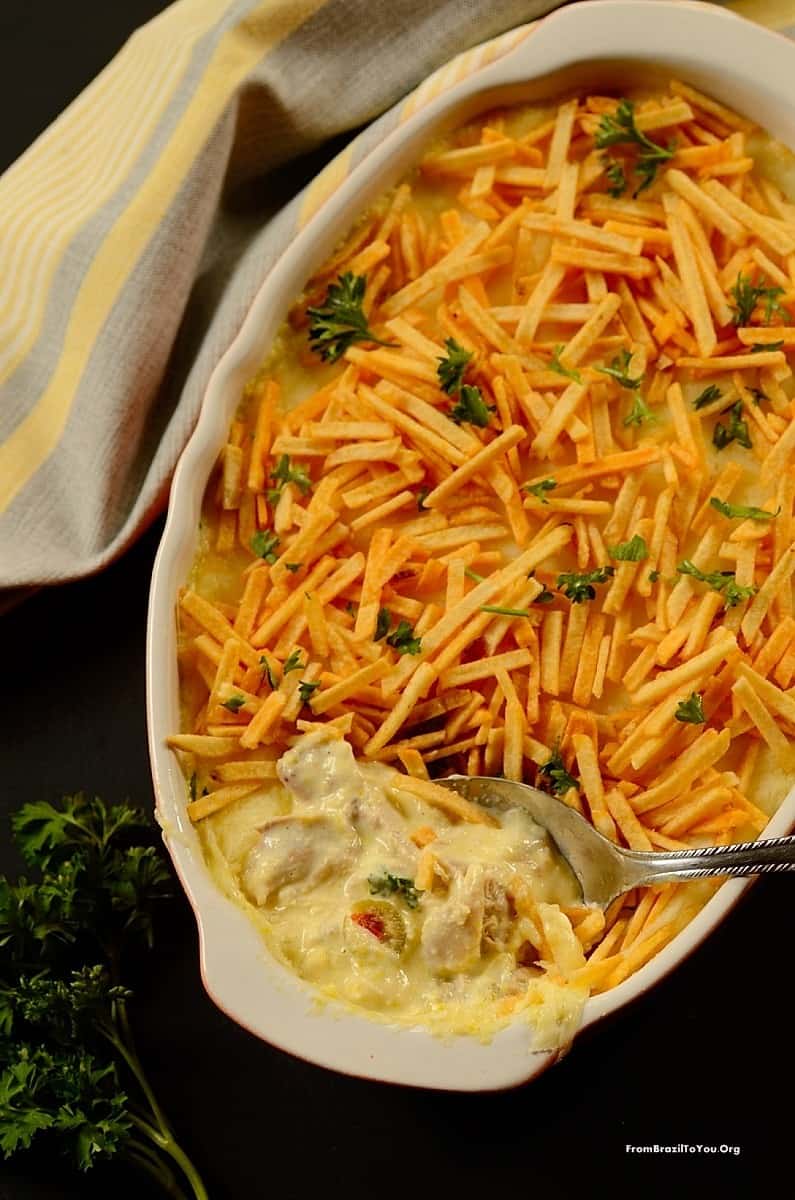 The French version basically consists of poultry cut into pieces, gently sautéed in oil or some other type of fat, deglazed with wine, and then stewed in gravy. It is a white stew — without any browning or caramelization. It was said to have been one of Abraham Lincoln‘s favorite dishes.

The Brazilian version is much simpler to prepare, as I mentioned earlier. Boiled chicken is shredded, quickly heated in a blended, creamy mixture of heavy cream, cream cheese, and corn, topped with cheese and shoestring potatoes, and then baked. The result? Both a time-saving and crowd-pleasing dish! 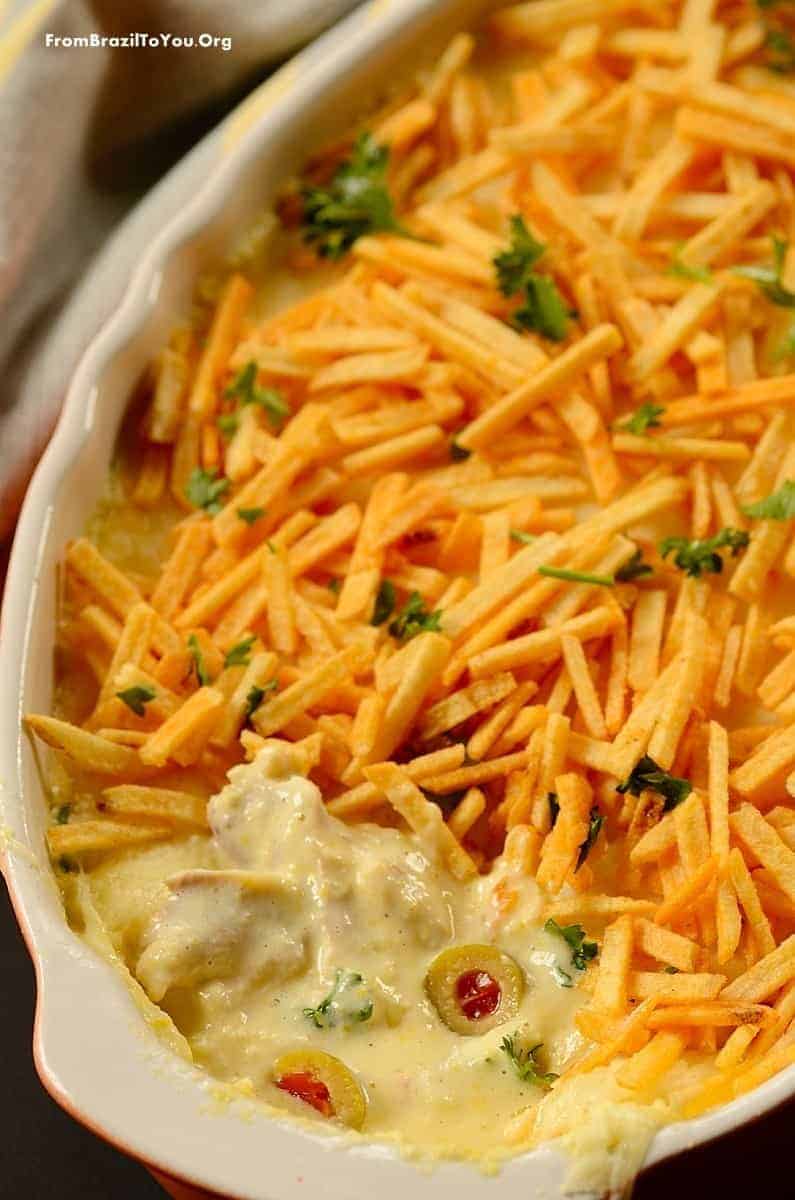 But Brazil isn’t the only country in the world to create a version of the dish. In the Spanish Caribbean, pollo en fricasé (chicken fricassee) incorporates a tomato-based sauce and red wine.

I am not a country, but I also have my own version. 🙂 It is the Brazilian version, of course, but with a couple of modifications based on my family’s taste preferences. First, corn is not blended into the heavy cream/cream cheese mixture; instead whole corn kernels are simply added to the stew in order not to overpower the creamy sauce. Second, shoestring potatoes are added as a topping to the chicken fricassée — but only after it is removed from the oven (to keep the potatoes from getting too browned and soggy). If desired, chopped fresh parsley or cilantro can be sprinkled on top right before serving. 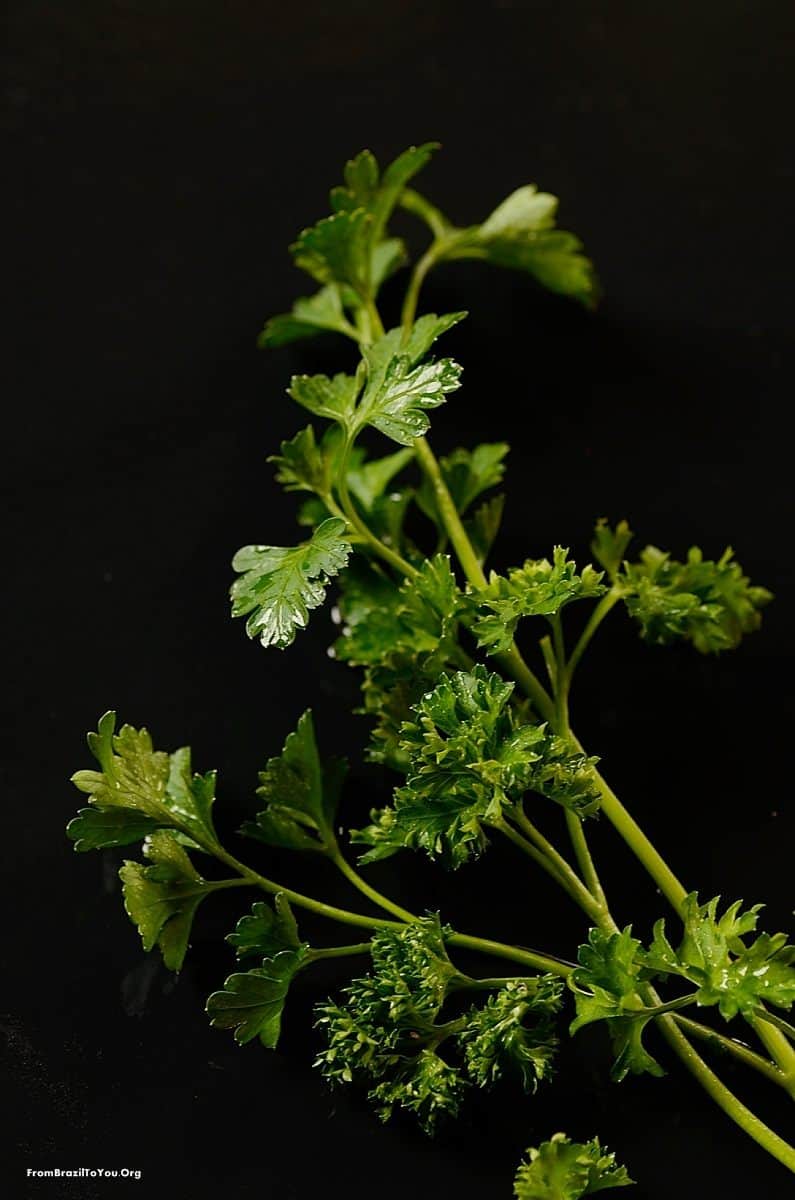 My advice? Try both the traditional Brazilian version and also mine. Even better, giving it your own personal twist could be a real plus. After all, a great dish can always become better.

Enjoy and have a great Spring break (my children are already super-excited!).

P.S: What are your plans? 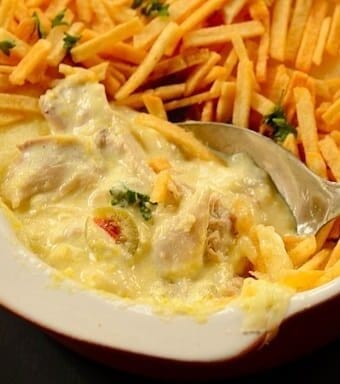 1. My personal preference is to add about 1/2 cup whole corn kernels to the creamy heavy cream/cream cheese sauce instead of blending corn in it -- because I think the blended corn overpowers the creamy sauce.
2. Many add the shoestring potatoes before baking the dish. Instead, I prefer to add them only after removing the dish from the oven -- preventing potatoes from becoming overbrowned and soggy.
DID YOU MAKE THIS RECIPE?Comment and rate the recipe. Also follow us on Pinterest at @easyanddelish for more delish recipes.