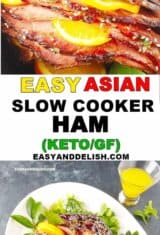 Sticky, sweet, tangy, and full of flavor, this slow cooker ham recipe with orange glaze is the real deal! It is rubbed with brown sugar and flavored with an Asian sauce made with orange marmalade, soy sauce, Dijon mustard, rice vinegar, Chinese five-spice, and sriracha. The amazing flavors make for the best Easter crockpot ham recipe ever.

This ham takes just 5 minutes to prep, and 30 minutes per pound to reheat. This cooking method saves oven space for other dishes and results in a tender and juicy crockpot ham that your family will love! The recipe has bright flavors adapted from the popular Chinese orange chicken. So delish! 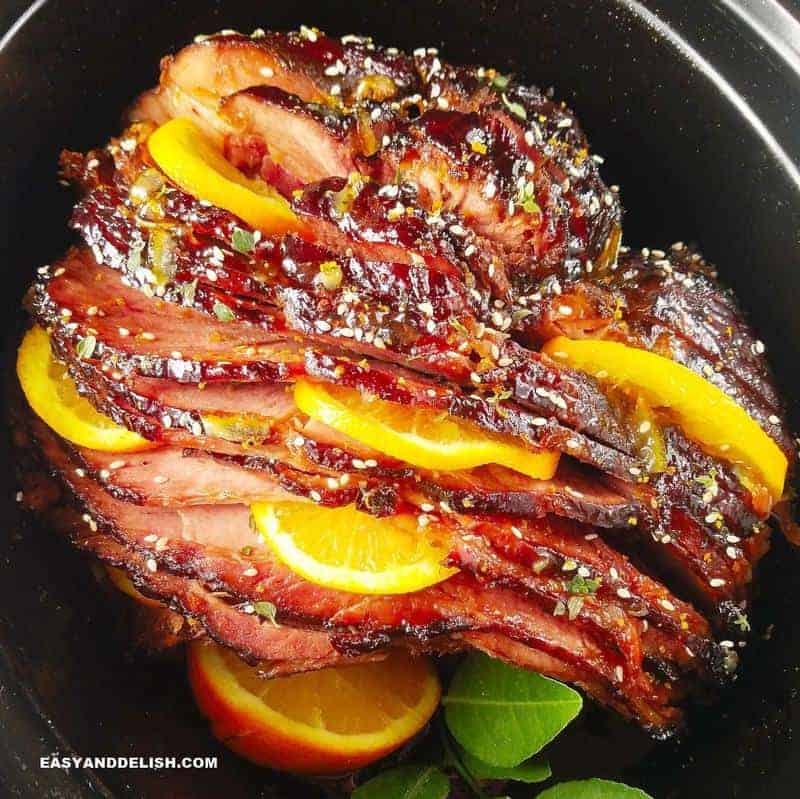 Holidays are busy times for those who cook. I think we all have been there at least once, right?

Having options to cook or reheat the main dish, such as this orange glazed ham, in more than one way can be quite handy.

You can choose to reheat a fully-cooked spiral ham in the oven, like our honey baked ham, or throw it in the crockpot and go on about your other tasks.

Although I usually bake my hams, I’m glad that this time I winded up cooking it in the slow cooker. That freed up the oven to bake desserts and rolls, and to cook and reheat side dishes.

What Kind of Ham Works Best in the Crockpot?

Hams that work best in the crockpot are those that can fit inside it-- plain and simple! To cook a fresh ham or reheat a precooked ham, the lid needs to fit on tight and secure in order to steam the ham enough to reach 145° F (62° C).

What this means is, you can cook or reheat any cut of ham in the crockpot: be it fresh or precooked, bone-in or boneless, whole or spiral-sliced, cured or uncured, plain or smoked. The most important factor is the size. Keep in mind that a standard-size crockpot (6-qt.) can fit in a 7 pound or less bone-in ham (8 pound or less boneless ham). Anything above that will require either a larger crockpot, trimming off a piece of the ham to get it to fit in, or cooking/reheating the ham in the oven instead.

When the ham doesn’t fully fit in the slow cooker, some advice using a triple layer of heavy-duty foil to cover the crockpot with a tight seal and then covering with the lid on top. I disagree with that! This decreases the efficiency of the crockpot-- especially if the foil leaves any gaps, which is always a risk. If that happens, say goodbye to a moist and juicy ham!

Anyway, all the factors above will influence the cooking time! Yep!!!! 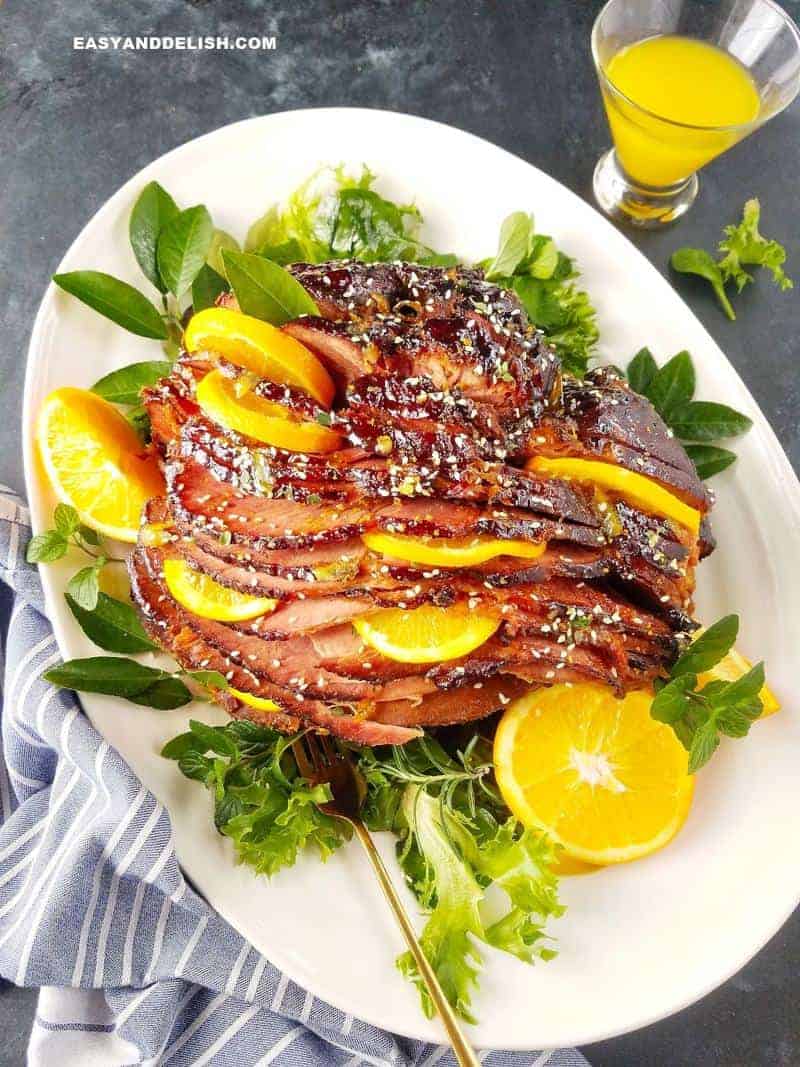 What Size Do I Need?

The size of ham that you’ll need to buy will depend on how many people you are feeding. Estimate about ¾ pound per person for a bone-in ham and ½ pound for boneless on holidays, when people tend to overeat. That means if you are cooking an everyday meal, you can cut that amount.

For an everyday meal,  plan on:

I find that a 2-lb. bone-in ham can perfectly feed a family of four or five for a regular dinner.

How to Make Slow Cooker Ham

I prefer a bone-in spiral ham, as it retains moisture and comes presliced-- so it is still easy to separate from the bone. But of course, any ham that fits the crockpot will work here.

All you need to do is:

But of course, you can use pineapple, apricot or apple jelly instead of orange marmalade for a simple variation of this slow cooker ham recipe.

You can also make this slow cooker ham with pineapple jam and juice instead. Another option is to use 7-up or Sprite with a pairing jelly. It’s all up to you! 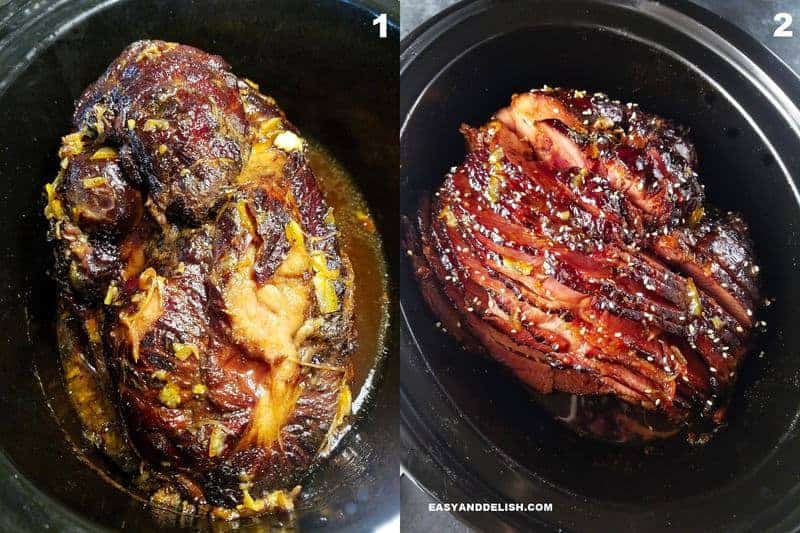 How Do I Make This Crockpot Ham Without Brown Sugar?

Brown sugar gives depth of flavor to this slow cooker ham recipe. But if you prefer, you may brush honey or maple syrup on the ham instead of rubbing brown sugar on it. This will make it less sweet!

For a savory version, rub garlic powder and/or a seasoning blend of choice on the ham instead of brown sugar, use chicken broth instead of orange juice and balsamic vinegar instead of orange marmalade, and skip the Chinese five-spice or use herbs. It will transform this ham into something new and exciting.

But if you make our slow cooker ham recipe as it is, you can use leftovers to make this ham and brie grilled cheese.

How long does it take to heat a ham in a crockpot?

It takes about 30 minutes per pound on low to reheat a fully cooked, bone-in spiral ham in the slow cooker or crockpot, or until the internal temperature reaches 140° F (60° C) according to the FDA’s recommendation.

That means a 7 pound ham will take about 3 ½ hours to reheat. If boneless, it takes about 40 minutes per pound. The reason why a bone-in ham cooks or reheats faster than a boneless one is because bones are conductors of heat.

How long does it take to cook a precooked ham?

First of all, as you can imagine, one doesn’t cook a precooked ham. You actually reheat it, since it is already cooked. But the time to reheat the ham depends on the cooking method.

How do you cook a ham that is not precooked?

CROCKPOT: If cooking in the crockpot, season ham well, place it face side down into a greased crockpot, and add ½ cup of water to the bottom. Cook on low for 8-10 hours.

OVEN: If cooking in a preheated 325ºF (163° C) oven, season well, place ham face side down in a roasting pan lined with foil, cover tightly with foil, and cook for 20 to 30 minutes per pound. If cooking in a lower or higher temperature, the cooking time will be higher or lower as well.

Can you put ham in the slow cooker without liquid like water?

You can certainly cook meats in the slow cooker without liquids, since slow cookers create steam that braises the meat until it is tender. But putting about ¼ to ½ cup of water, broth or another liquid renders a great flavoring liquid that can be served along with the ham or serve as a base for gravy.

How do you heat a spiral ham without drying it out?

You can reheat a precooked, spiral ham by placing about ½ cup of water in the bottom of the pan and covering tightly in foil, and then heating for 10 minutes per pound at 350° F (180° C).

If reheating in the microwave, pour a little liquid in and loosely cover sliced ham with plastic wrap or a lid and heat on high for 1 minute, turn the dish, and heat in 1-minute intervals until reheated. That will prevent it from exploding on you!

Can I freeze Slow Cooker Ham?

Yes! Place cool ham in an airtight container with its juices and freeze for up to 3-4 months. Thaw in the fridge! 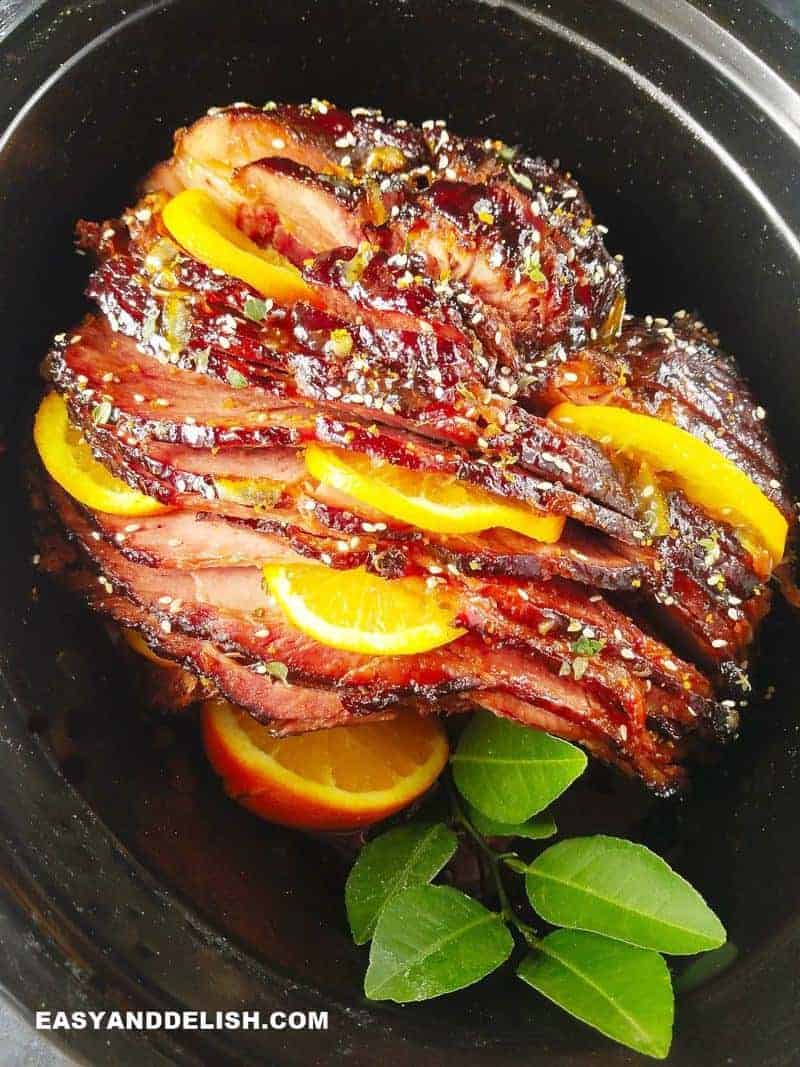 What to Serve With Ham

You can serve this Crockpot Ham with pretty much any side dish. Here are a few options:

Using a slow cooker to cook or reheat ham is an easy and mess-free method… and most of all, it results in a tender, juicy and delish ham. I am already looking forward to making this every Easter… and Christmas, too. If cooking for a few people, these lamb chops make a great dish for Easter!

It will simplify family dinners every time I want to serve a small ham. Just set the crockpot and forget about it! 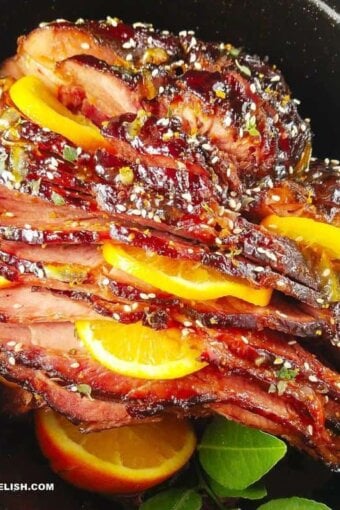 DID YOU MAKE THIS RECIPE?Comment and rate the recipe. Also follow us on Pinterest at @easyanddelish for more delish recipes.
« 85+ Easy Freezer Meals To Make Ahead on a Budget
35 Easy Pantry Recipes that Bring Comfort »