Nothing like Mother’s Day, don’t you think? My children and I love cooking together, as you know… and to celebrate the occasion, I received the special treat of queijadinha de laranja for dessert and an easy yet quite tasty Barilla® Spaghetti with Meat Sauce as the entrée—all prepared by my angels and me. 🙂 This is an Italian recipe, like many which were brought to Southern Brazil, a region greatly influenced by Italian immigrants. 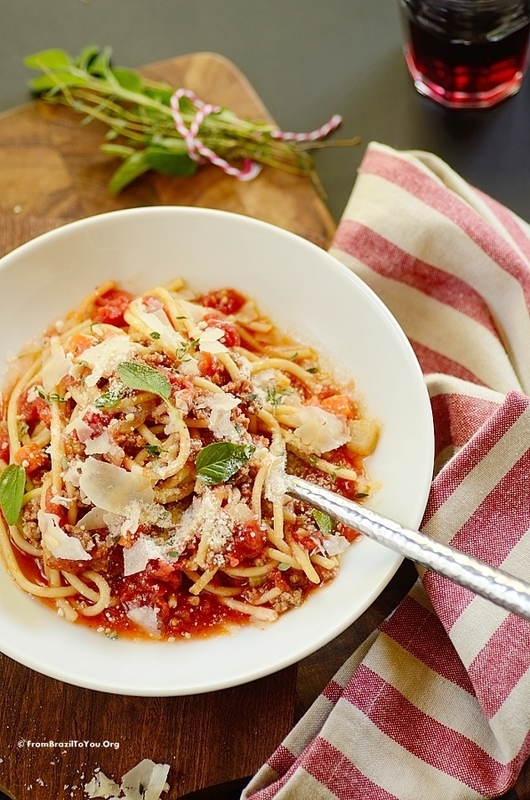 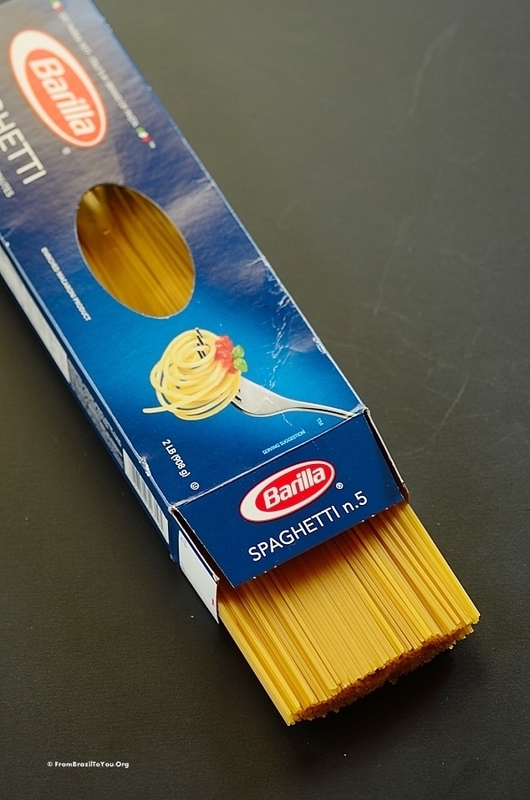 … followed by a few preparations in the kitchen, and then a delightful meal. I think this is our own way to celebrate family and togetherness– and for my seven and eight year-old to celebrate me, their Mommy. 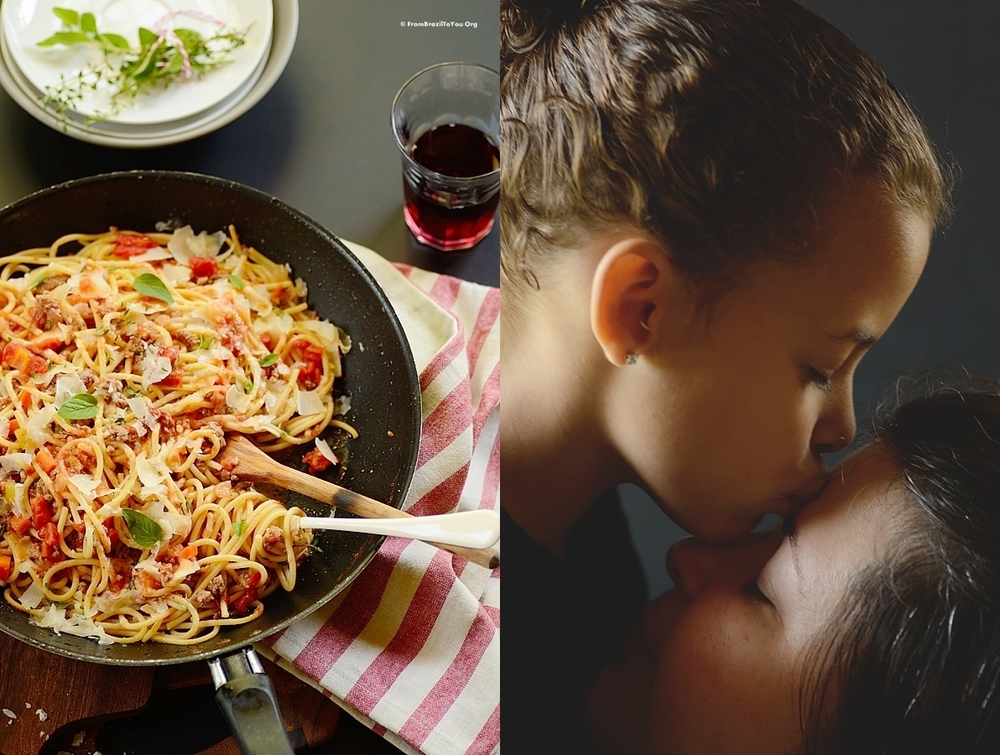 Sometimes the best things in life are simple, yet full of meaning. They know all too well how to touch my heart… and “food” is written all over! 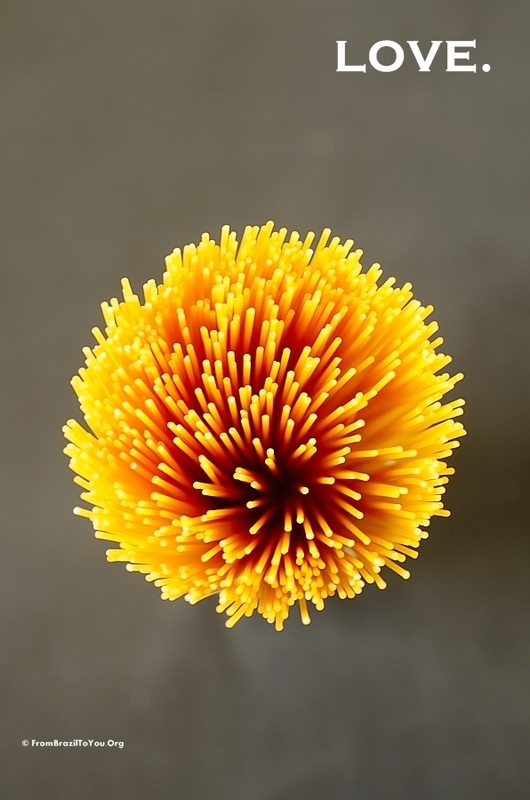 Following the Barilla® Spaghetti with Meat Sauce recipe was easy! We simply sautéed chopped onion, carrot, and celery in olive oil, browned lean ground beef in the same pan, then deglazed with white wine (optional), which I love and which makes the pasta even more delicious. Next we added diced canned tomatoes, seasoned with salt and pepper, let the meat sauce simmer, reduce, and thicken… and then tossed 1 lb. of cooked spaghetti in the cooked meat sauce. Then as a final touch, we topped the pasta with shaved cheese. Yummmm!!!

There was silence at first, followed by requests for seconds and even thirds. I chose just the right dish… it was hearty and so comforting — just like a mother’s love! 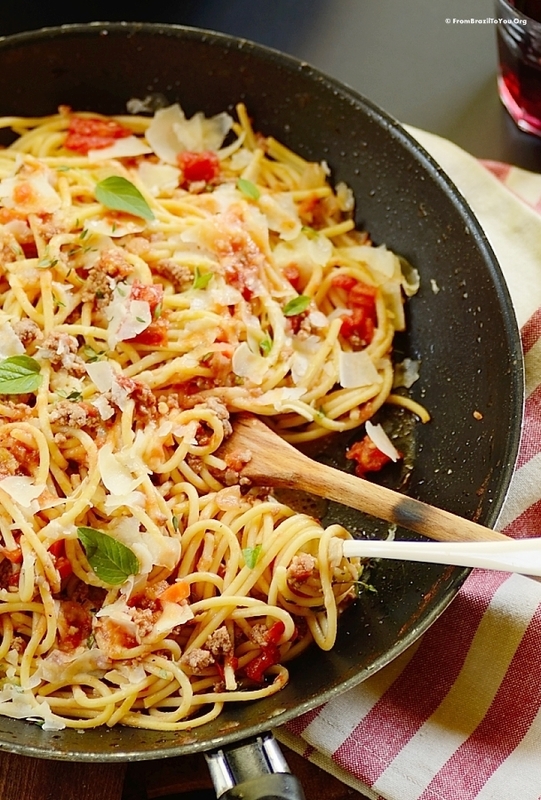 I miss my Mom! As you know, the Atlantic Ocean keeps us physically apart. I wish she were here to share with me and her granddaughters such a wonderful meal and loving moment. But no worries! I will let her know that if it is any comfort, I ate enough Spaghetti with Meat Sauce for both me and her. My own way of saying: “This is for you, Mãe!” 🙂

As Mother’s Day approaches, what do you intend to prepare for your Mom on her special day? Or perhaps for your Grandma, Aunt, or that amazing soul who raised you like a daughter or son?

This Barilla® Spaghetti with Meat Sauce and other Barilla® recipes can help you to make her day!

HAPPY MOTHER’S DAY — from a Mom who is sending out much love to all other moms out there! 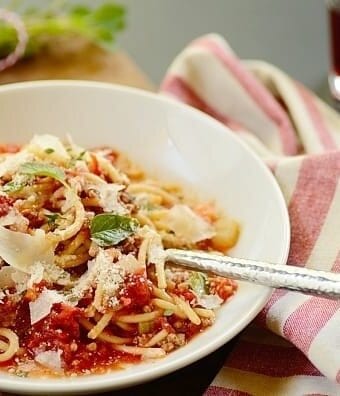 We simply sautéed chopped onion, carrot, and celery in olive oil, browned lean ground beef in the same pan, and deglazed pan with white wine (optional), which I love, and which makes the pasta even more delicious. Next we added diced canned tomatoes, seasoned with salt and pepper to taste, let meat sauce simmer, reduce, and thicken… and then, tossed 1 pound cooked spaghetti in the cooked, reduced meat sauce. As a final touch, we topped pasta with shaved cheese. This is an easy and tasty recipe!
DID YOU MAKE THIS RECIPE?Comment and rate the recipe. Also follow us on Pinterest at @easyanddelish for more delish recipes.

This is a sponsored conversation written by me on behalf of Barilla. The opinions and text are all mine.