I am nuts for nuts! 🙂  Although my palate doesn’t discriminate, my favorite type of nut is one those that I grew up eating lots of: cashew nuts, native to Northeastern Brazil. While they can be used in a range of recipes or consumed by themselves raw or roasted, Glazed Cashew Nuts (or Castanha de Caju Glaceada) is by far my preferred way to devour cashew nuts.

The curious thing is, cashew nut is NOT A NUT. Huh? That’s right! It is marketed as a nut, but is actually a seed, attached to its meaty, sweet, astringent fruit as you can see below. 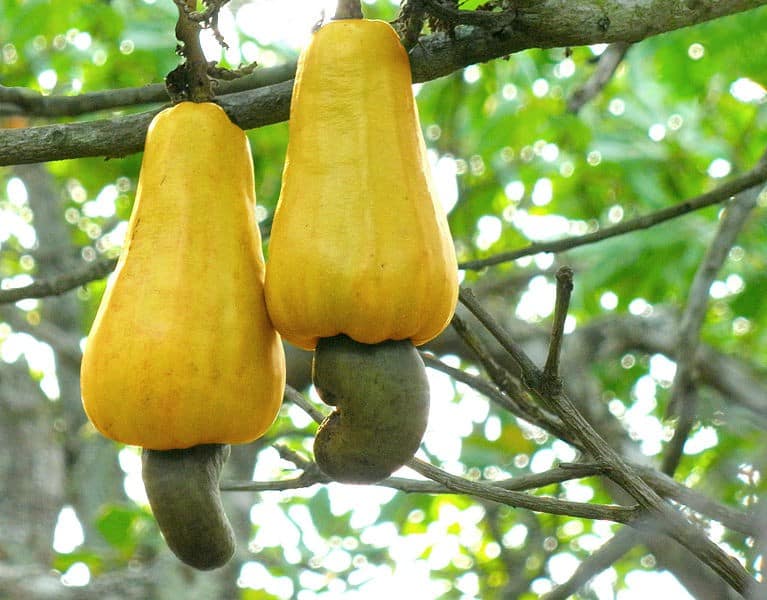 The fruit, cashew apple (caju in Portuguese), makes great compotes (my mother’s is the best!), juice, alcoholic (e.g. caipicaju) and non-alcoholic drinks (cajuína), ice cream, vegetarian stews such as the Bahian moqueca de caju, and other dishes. Both cashew fruit and cashew “nuts” are very popular in Brazil– much of the world has never experienced the fruit, however, and only seems to be aware of the cashew “nuts”.

Did you know that the World’s largest cashew tree is in Northeastern Brazil? It is named Cajueiro de Pirangi (Pirangi’s Cashew Tree), located in the state of Rio Grande do Norte. According to the Guinness Book of Records,  it covers an area between 7,300 square meters (1.8 acres) and 8,400 square meters (2.1 acres). This is the size equivalent to 70 normally sized cashew trees!!! 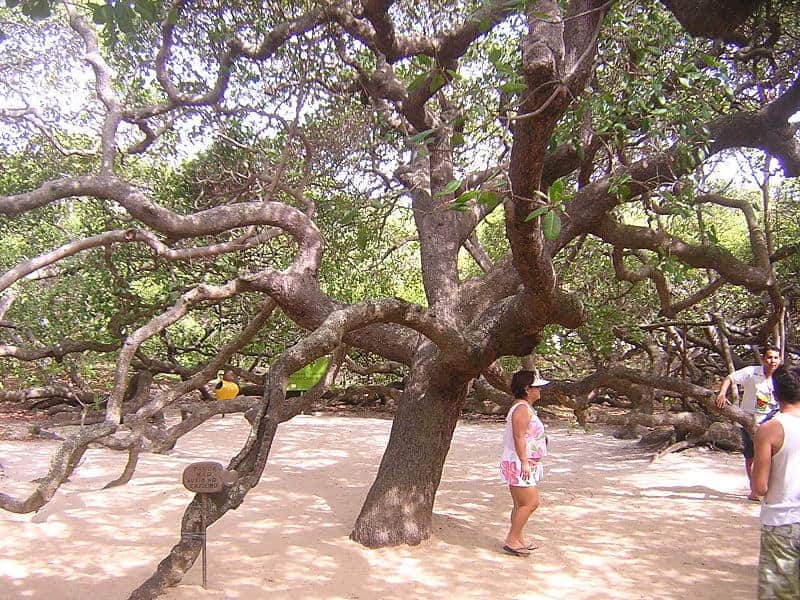 Returning to our glazed cashew nuts recipe, it has been adapted from My Catholic Kitchen… the blog that I have been assigned to this month by the Secret Recipe Club.  Veronica is its author and a self-taught cook from Coastal Virginia, whose blog serves as a creative outlet for both her faith and cooking passion. My Catholic Kitchen features both classic and modern American recipes as well as Italian dishes, and other family favorites. Bookmarking several of her recipes, I came across what she calls Crack Cashews. Perusing her recipe with such an interesting title, I found myself in familiar territory: Castanha de Caju Glaceada (or Glazed Cashew Nuts)! Of course, I had to pick a favorite of mine (and of many) to feature here… 🙂 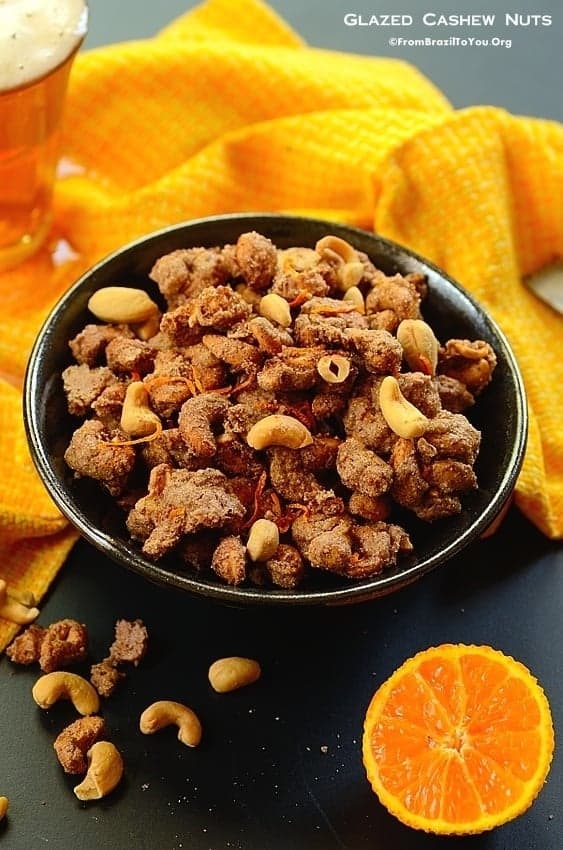 As always, I modified Veronica’s recipe a bit so I could call it my own. I substituted orange juice for water, as well as a mix of ground cinnamon and nutmeg for pumpkin pie spice. You are welcome to try either recipe, or to put in your own personal touch(es) as well.

My kitchen smelled just like Christmas! I could barely control myself from noshing on these fabulous glazed cashew nuts while taking the photographs… But now, if you will excuse me, I have some serious  cashew snacking to take care of… 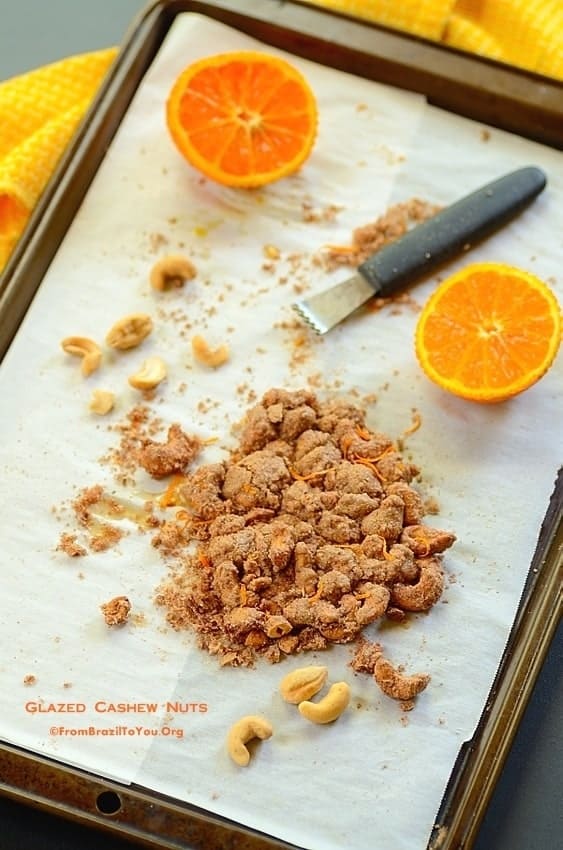 What’s your favorite cashew nut recipe? Did you know about the existence of cashew fruit? 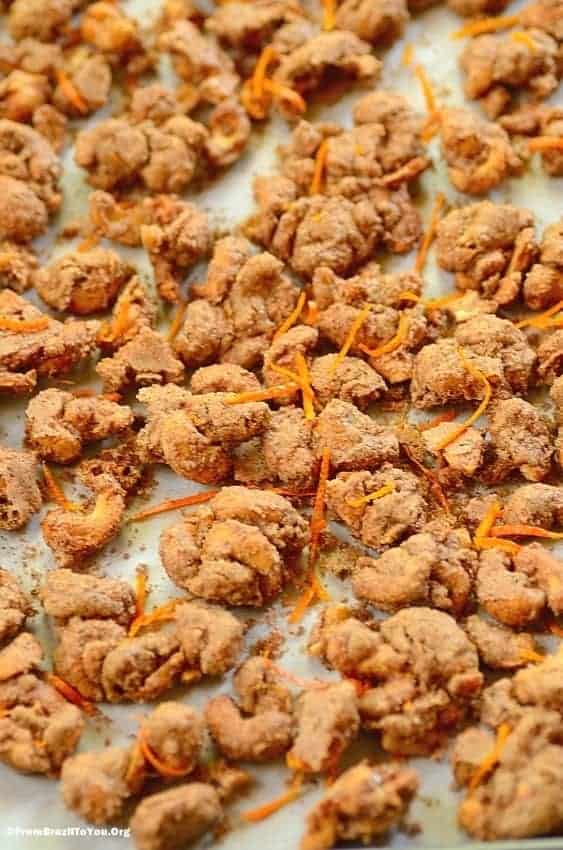 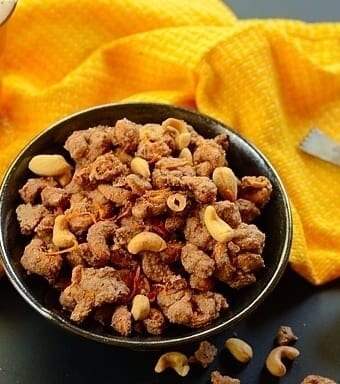 Aromatic, sinfully tasty Glazed Cashew Nuts that can be served by themselves or accompanied by an ice-cold beer, guaraná soda, or other drink of your choice.
Prep Time 7 minutes
Cook Time 23 minutes
Total Time 30 minutes
Servings 8
Author Denise Browning 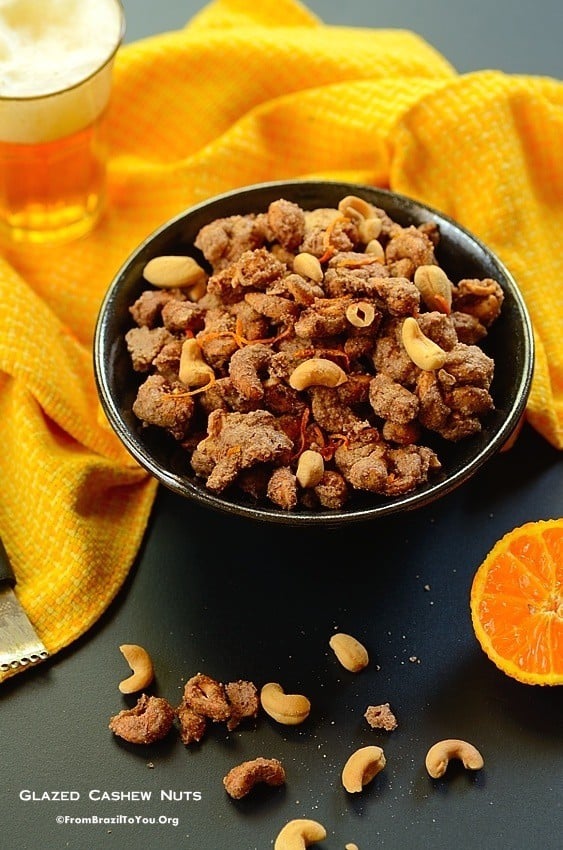