Portuguese corn bread is an easy and traditional recipe, very popular in Portugal and Brazil which can be served with Portuguese kale soup (caldo verde).

What happens when a self-confident cook acts impulsively? Well, see for yourself.

This is my story about making Portuguese Corn Bread or Broa de Milho, for the very first time, after sleep deprivation and a very tiring morning.

It is not certainly my first time enjoying this Portuguese treat, which is so well-appreciated in Brazil that we ended up Brazilianizing the recipe. The addition of fennel seeds is a clear example of this as well as guava paste (sweet version). However, as you will see, it is my first time actually baking Portuguese corn bread ( Broa de Milho) , and an experience that I will never forget…

It started the night before, when I spent an eternity choosing a good recipe for Broa de Milho from among many others that, honestly, left a lot to be desired. Some contained obvious technical mistakes, while others were vague in their directions. How I detest this sort of recipe!

After selecting the recipe, it was already getting into the wee hours of the early morning. Time to go to sleep. A few hours later, the alarm clock loudly announced that it was time to wake up, make all the necessary arrangements to get my children ready for school, and drive to take care of some errands.

Several hours later, when I finally set foot in the kitchen I was exhausted. But I was going to make that bread, come what may.

It was already too late when I realized that I had forgotten to add the salt into the yeast-water-sugar mixture. By that point, I had already mixed all the ingredients together and kneaded the dough. “What to do now?” would have been a reasonable question to ponder, before acting on impulse. But I didn’t stop to think.

What did I do instead? Oh, I simply added the salt ( 1-1/2 Tablespoon of salt instead of 1-1/2 teaspoon) to the plain dough without even considering the more sensible option of dissolving it first in a bit of lukewarm water. Now not only was the dough too salty, but its texture had changed, also.

OK, I was about to scream at myself, when suddenly I had the “brilliant idea” of balancing out the faulty extra saltiness of the dough with sugar. Yes, let’s balance the salt with sugar. My thought was this:  since I added about 3 times more salt than the recipe asked for, let me correct that mistake by adding 3 times the amount of sugar in the recipe. Ho, ho, that was exactly what I did. No matter how much I kneaded, a very granular dough was what I got. No surprise there!

“You know what, let me just make the dough over again,” I told myself.

But I was nearly out of yeast, of course, and had no time to go to the supermarket. So I finally said to myself, just loosen up a bit and enjoy the ride– after all, nobody else is here to yell at you — I was thinking how blessed I was not to be in a bakery or restaurant kitchen at this moment. I looooove baked goods. I kind of enjoy baking, although I am not a pastry chef. But this bread was fast becoming the product of a confused mind combined with frustation, which is a recipe for disaster. I was too stuborn to admit it!

I still waited for the dough to double after the first hour. It didn’t. The temperature here has been pleasant — far from warm. “So then let me put the dough in a very slightly heated oven….” It helped a bit, but did not resolve the problem. It was time to pick my children from school. I did… and stopped by the supermarket, too. I knew that I needed to remake the dough.

I was too curious about how disastrous the original dough would turn out to just throw it away. I said to myself: “Denise, since you cannot enjoy eating it, permit yourself at least to have a good laugh, accompanied by some useful lessons. I got– both! Oh, how I needed that laugh. Life is too short to take things so seriously all the time. Don’t you agree?

To complete the circus, I also forgot to place a deep baking tray under the tray that held the loaves…. How wonderful!!! Please, see for yourself: 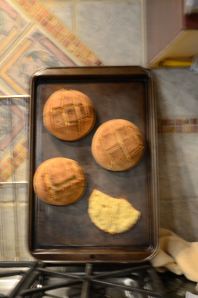 I promise you: I did not glue the loaves onto the pan…

I had to use all my strength to pry the rocky loaves from the tray. No problem! My little one quickly found what to do with them: she rolled them around on the floor. :):):)

So when you go to the kitchen, don’t act like a fool (me). Be rested and focused, unless you need a good laugh. Remember: the final result depends on all the little details.

I can be very obstinate sometimes, so a few hours later I remade the bread — this time a bit different from the original recipe. I used 3 cups of all-purpose flour (instead of 4), and 3 of cornmeal (instead of 2). I also added 2 additional tablespoons of butter, paid attention to the important details, and made a few adjustments. It was in this way that I finally got the Portuguese corn bread loaves right!

Now I can say “Enjoy our Portuguese corn bread!” instead of only “Have fun!!!” 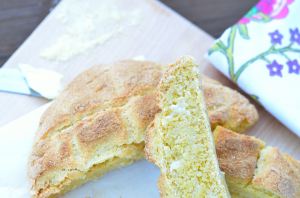 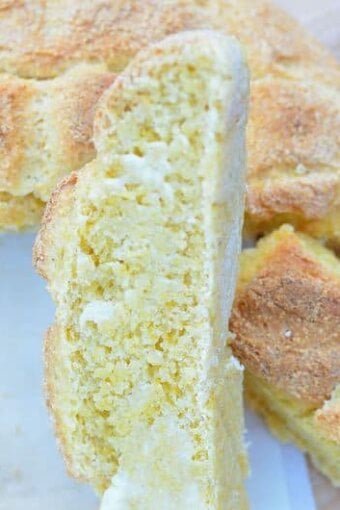 Recipe based on Pryia Easy and Tasty Recipes blog.