Published: Dec 11, 2013 · Modified: Sep 7, 2022 by Denise Browning · "This post may contain affiliate links which won’t change your price but will share some commission." · 43 Comments

Who doesn't love panettone? At my table, it is a family tradition! In Brazil, Christmas dishes can vary from one region to the next, or even from family to family, yet panettone seems to be a near-unanimous national preference. Old-fashioned French toast (or rabanada in Portuguese) is another tradition handed down by my late maternal Grandmother,  a Portuguese descendant. By uniting two family traditions, I came up with my own, with this scrumptious Upside-Down Panettone French Toast (Rabanada de Panetone) -- a festive treat that can be served either for Christmas breakfast or as a dessert. Way cool, don't you think? 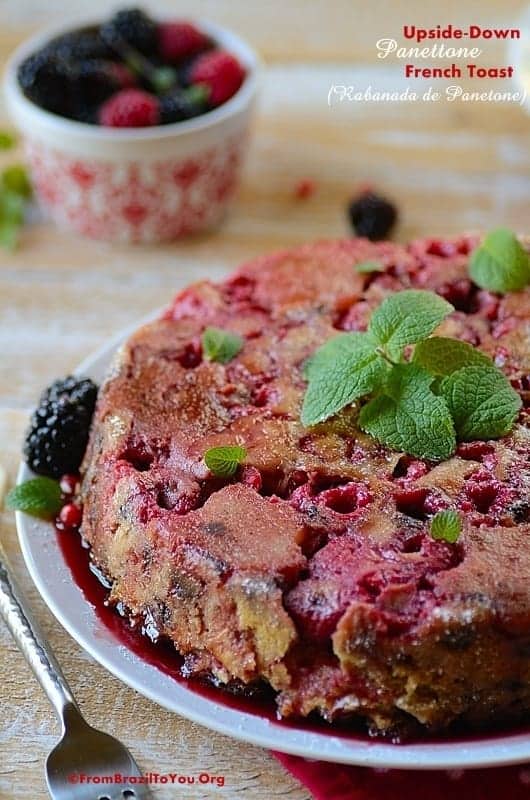 'Wait a minute! Isn't panettone Italian?' someone might ask... So 'why is panettone a tradition in Brazil?' Good question!

This dome-shaped sweet bread loaf from Milan, Italy is a tradition in Brazil because my native country is home to the largest number of Italians outside of Italy. 🙂  They have brought their traditions along with them, and influenced both Brazil's cuisine and its culture -- especially in the Southern and Southeastern regions.

Although panettone is marketed under several brand names around the world, Bauducco is the most popular one in Brazil. In recent years, Brazilian-made panettone has been available in the US at Walmart supermarkets, among other places. Panettone is also enjoyed in many other countries in South America, Portugal, Southeastern France, Spain, Germany, and Switzerland. Its popularity is due to its delicious taste, low cost, and abundance. The most traditional type contains candied fruits and raisins-- but nowadays, many variations are available, such as this one with chocolate chips. 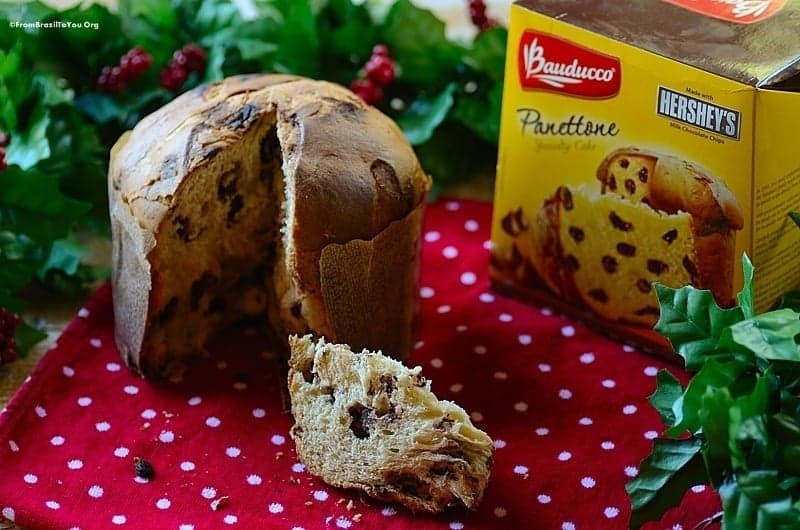 Some of the other panettone flavors found in different parts of the world include tiramisu, lemon, pear, fig, and herbs.

Panettone is far older than one might imagine. Its origins date back to the Roman Empire, when ancient Romans used to sweeten a type of leavened cake with honey. Many centuries later, in its previous fruitcake-like shape, it appears in a sixteenth-century painting by the Flemish Renaissance painter Pieter Brueghel the Elder... 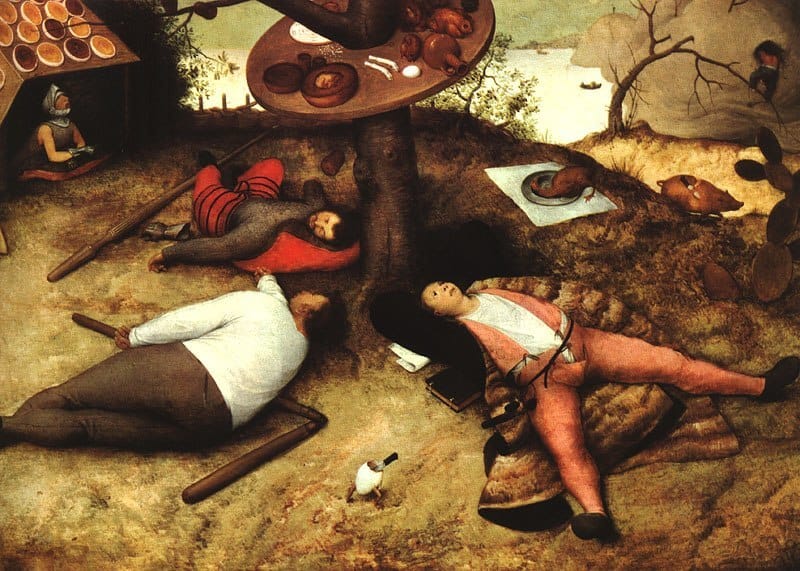 ...as well as receiving mention in a contemporary cookbook of that time, Opera dell'arte del cucinare,  penned by Bartolomeo Scappi -- personal chef to popes and cardinals.

But only later, in the 18th century, did panettone come to be associated with Christmas. It was referred to in the writings of the Milanese illuminist Pietro Verri, who recorded its name as "Pane di Tono" (luxury cake).

In the early 20th century, panettone began to be produced in large quantities in Italy, where it acquired its present tall, domed shape and light texture. Its popularity soon spread to other countries, where it began to take on different flavors.

Nearly all who take a bite become instant fans. Personally, I can enjoy panettone plain, toasted and spread with butter or jam, in sweet sandwiches, tiramisu, trifles, bread puddings, panettone french toasts, and in many other culinary creations. 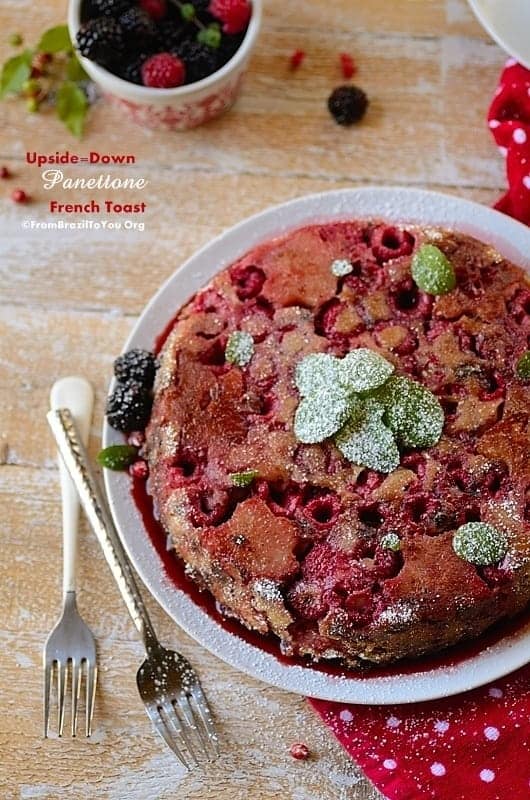 OK, I confess it... I'm a huge fan of panettone! Great is whoever invented it, and blessed are we who can feast our souls enjoying its sweet, airy richness. Well, whether Bauducco brand or not, grab your panettone and come to the kitchen with me to prepare the best panettone French toast that you will ever have... 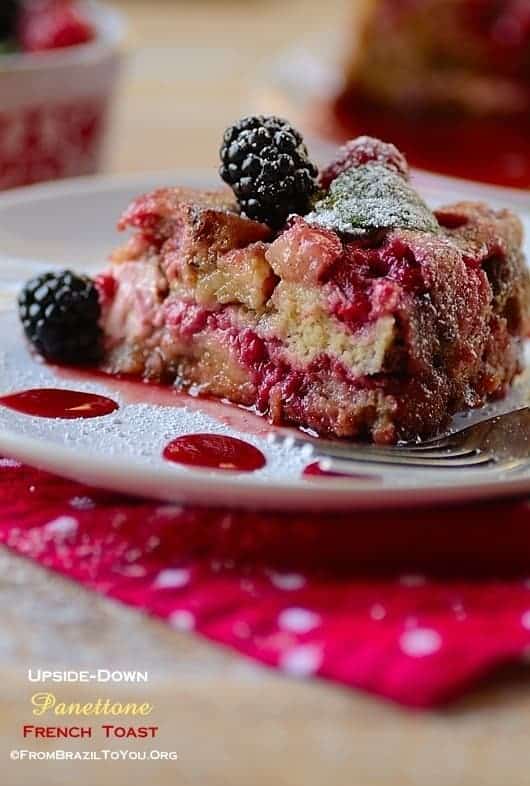 P.S.: I am curious... What is your favorite panettone (brand and flavor)? 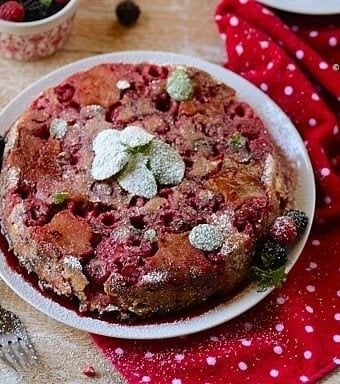 A festive, gorgeous french toast made from panettone, pears, and raspberries, that can be served for Christmas breakfast or as a dessert.
Prep Time 25 minutes
Cook Time 35 minutes
Total Time 1 hour
Servings 8
Author Denise Browning

Raspberries are cultivated in both Southern and Southeastern Brazil.