Hummin’ and hummin’… A famous traditional Brazilian New Year’s song is definitely on my mind — and on my lips. “Farewell Old Year, Happy New Year! May everything that is good come true in the new year…” What is also on my mind (and lips) is not a classic caipirinha… but a pomegranate caipirinha! I hope this cheers your spirit… 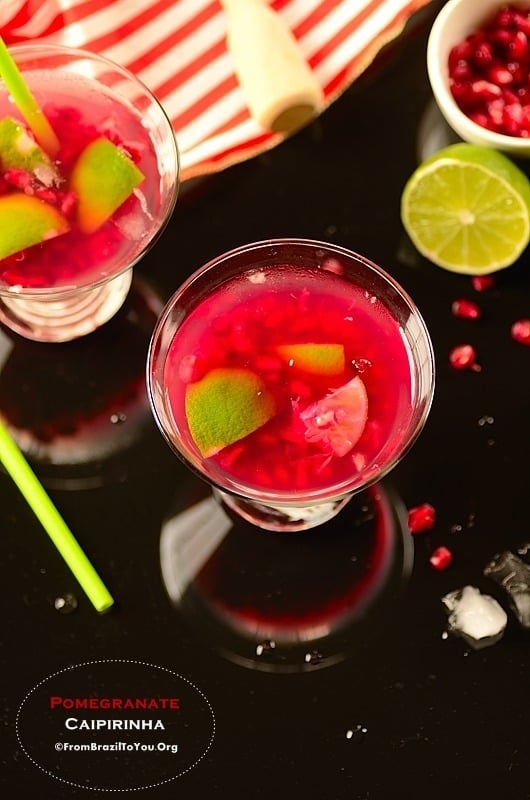 As I explained in both our New Year’s Champagne Cocktail and Lentil and Beef Soup posts from last year, Brazilians are superstitious and love to incorporate good luck rituals into their New Year celebration (réveillon). Well, this time around, instead of champagne I have used caipirinha —  Brazil’s national cocktail drink — as the base for our current drink. And instead of lentils, I have chosen pomegranate. Why?

Although pomegranate is an ancient fruit originating in the vicinity of Iran, it was introduced into Brazil by Portuguese settlers centuries ago. The state of São Paulo is its largest producer in Brazil. As the fruit has numerous seeds, tradition links it with prosperity.

In fact, there is a good luck ritual (simpatia) that calls for one to eat the pulp of seven pomegranate seeds and afterwards to store the  dry seeds in one’s wallet in order to attract wealth. 🙂  If it doesn’t work, you will at least have a delicious and refreshing pomegranate caipirinha to drink and share with friends– in addition to all of pomegranate’s associated health benefits such as reduction of LDL and a rich concentration of vitamins A and B, which protect vision and strengthen the immune system. 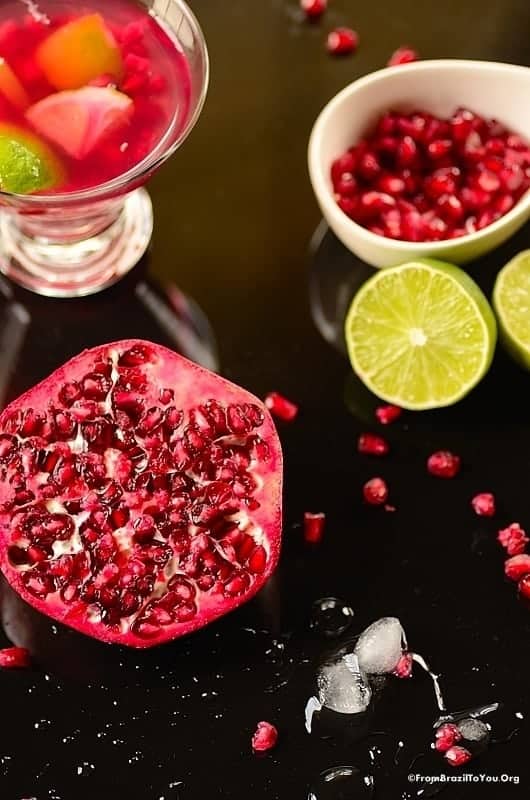 Well, pomegranate has also appeared in biblical texts where it is associated with passion and fertility. The Greeks considered it as a symbol of love and fertility… The pomegranate was considered sacred to the goddess Aphrodite, as much credence was placed in its aphrodisiac powers. For Jews, the pomegranate is a religious symbol with deep meaning in the ritual of the Jewish New Year (Rosh Hashanah) when it is always wished that the coming year will be better than the last.

As this year fades away, we welcome 2014 with a pomegranate caipirinha, wishing in a brand new year…. A time filled with many blessings such as prosperity, health, peace, and many, many others.

Thank you for continuously blessing me with your readership… xx 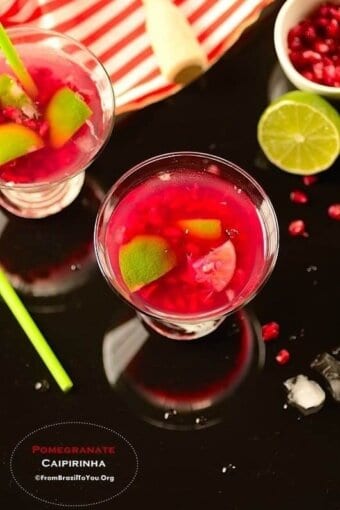 To learn how to de-seed a pomegranate, please click here.
DID YOU MAKE THIS RECIPE?Comment and rate the recipe. Also follow us on Pinterest at @easyanddelish for more delish recipes.