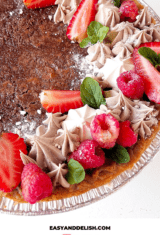 This chocolate chess pie is a classic Southern dessert with a flaky pie crust, fudgy filling, and crackly top. It is the dream of any chocolate lover just like our no bake chocolate pie with meringue! 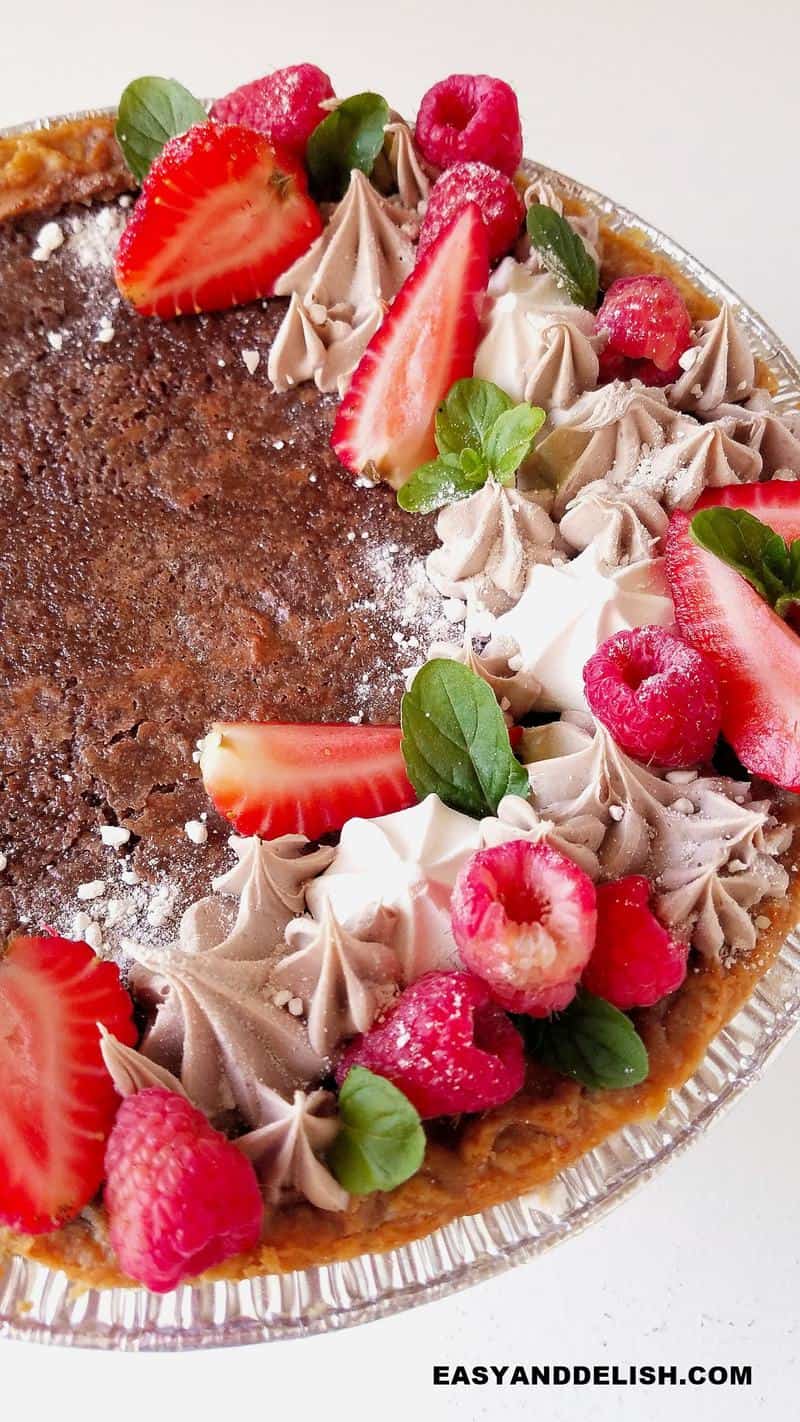 Do you love chess pies but you are not sold on the intensive labor sometimes required? Well, how about if I tell you that our chocolate chess pie recipe is actually as easy as pie?

To start you have the option to either make the crust at home or buy one ready as I did. Then all it is left for you to do is the filling which you can whip up in under 10 minutes and then bake.

And the result is even better! With not much effort put into our pie, you will wind up with one of the most scrumptious desserts ever.

It is like a fudgy brownie met a pie crust… for real! I think you can guess the rest!

Serve with berries or simply a dollop of whipped cream and you will have sweet heavenly bites.  😉

What is Chocolate Chess Pie?

Although chess pie recipes are a staple in the Southern United States, some historians agree its origin dates from the mid-18th century in England.

The first cookbook to publish a chess pie recipe described it as a cheesecake-like filling but made without the cheese. This is because cheesecakes and chess pies share common ingredients like eggs, sugar, and butter… and even a crust although one is made out of cookies and the other has a  pie dough.

Over time, bakers created different chess pie variations. They differ sometimes in ingredients: some are made with different types of milk as milk, buttermilk, and evaporated milk while others use cornmeal, cornstarch, or flour for thickening the custardy filling.

But that is not all! There are different chess pie flavors as well: vanilla, buttermilk, lemon, vinegar, and chocolate chess pies are the most common variations.

Of course, the contemporary Milk Bar’s Crack Milk Bar Pie is the modern version of the chess pie and is getting famous!

Why is it called chess pie?

There are basically 3 main theories on how chess pies got their name:

I don’t know which theory is true but I find the first one more credible because it sounds more factual! How about you? 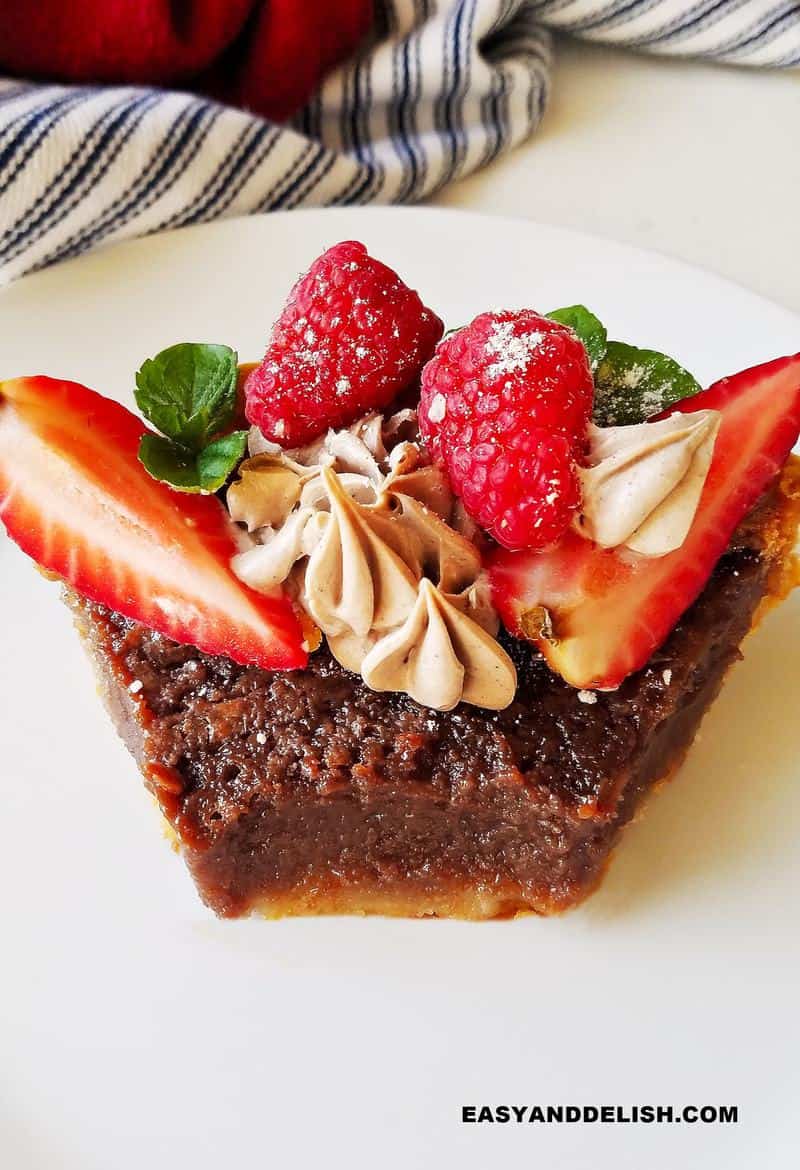 There are many ways that one can use to describe the taste of a chocolate chess pie.

I find the simplest way to describe it as a dessert with a fudgy, rich, and smooth filling and crackly top encased in a  flaky crust. It is like a fudgy chocolate brownie met a pie crust! LINK

But you won’t visually see the crackly top in ours because I could not resist enough and ate piece by piece or crackle by crackle along with one of my daughters. It was addicting!

The crackled top gave the smooth filling a great contrast of texture and of course, a rustic look.

At first, you may think you overbaked the pie because of the hard shell or crackly top but a smooth and fudgy filling sits underneath undisturbed like a perfectly baked custard.

In fact, at first, the layer below the crackly top may seem a little undercooked just like a fudgy brownie when that has been just removed from the oven. So don’t worry! You didn’t underbake it either!

Just allow the filling set completely as the pie cools and then chill it. When you slice it, you will see it was neither under nor overbaked.

This is the part that you see yourself in trouble: A decadent chocolate chess pie filling is incased into a flaky pie crust and you’ll want to eat even the crumbs. 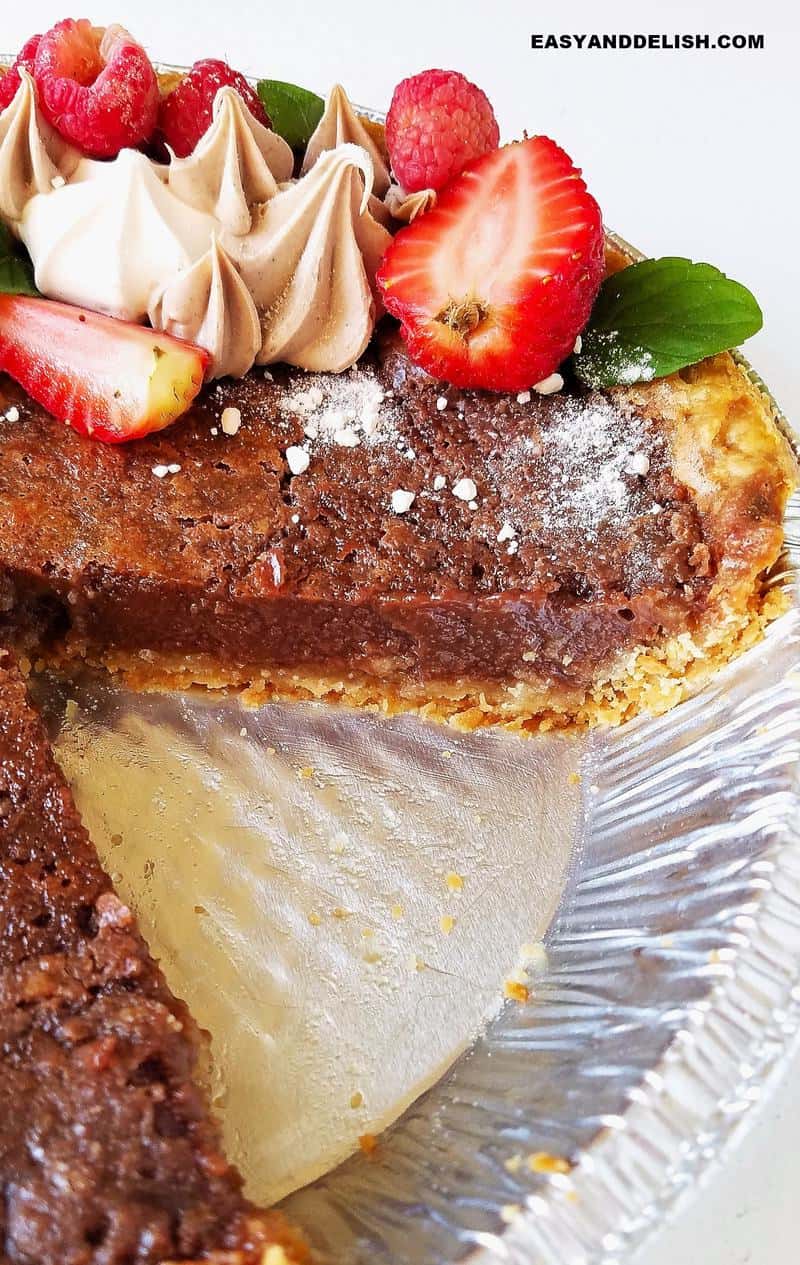 To prepare our Southern chocolate cheese pie, you will need up to 10 pantry ingredients:

Most traditional recipes use cocoa powder to make chocolate chess pie recipes due to the fact it is a versatile pantry ingredient that can last longer. It’s the ideal ingredient to throw into a chess pie.

Just like in my favorite brownie recipe, I used both chocolate and cocoa powder to convey the flavors and texture that I want.

While the chocolate will add a dense and gooey texture, the cocoa intensifies the chocolate flavor and add a bit of chewiness to the filling just like in brownies.

The best type of cocoa to use is the natural unsweetened cocoa powder, which gives our chocolate chess pie a slight acidity that is so traditional in old-fashioned chess pie recipes. But if you only have a Dutch-processed cocoa powder you can use it instead. It will convey a darker and more neutral flavor to the filling because is alkaline.

The first option will give the pie a more authentic flavor because traditional chess pies are often flavored with a dash of vinegar to cut through the sweetness. It will add acidity without calling for an extra ingredient: vinegar!

Many chocolate chess pie recipes out there use a combination of evaporated milk and cocoa powder.  It is like eating chocolate milk in my humble opinion. Instead, I preferred to use a combination of chocolate and butter to get a richer and solid flavor. Of course, I added natural unsweetened cocoa powder as well to get the required acidity so characteristic of chess pies. And yes, I added a reduced amount of full-fat milk to mine as well which diluted a little of the rich chocolate flavor but not quite. The pie was still chocolatey without tasting overwhelming!

How to Make Chocolate Chess Pie 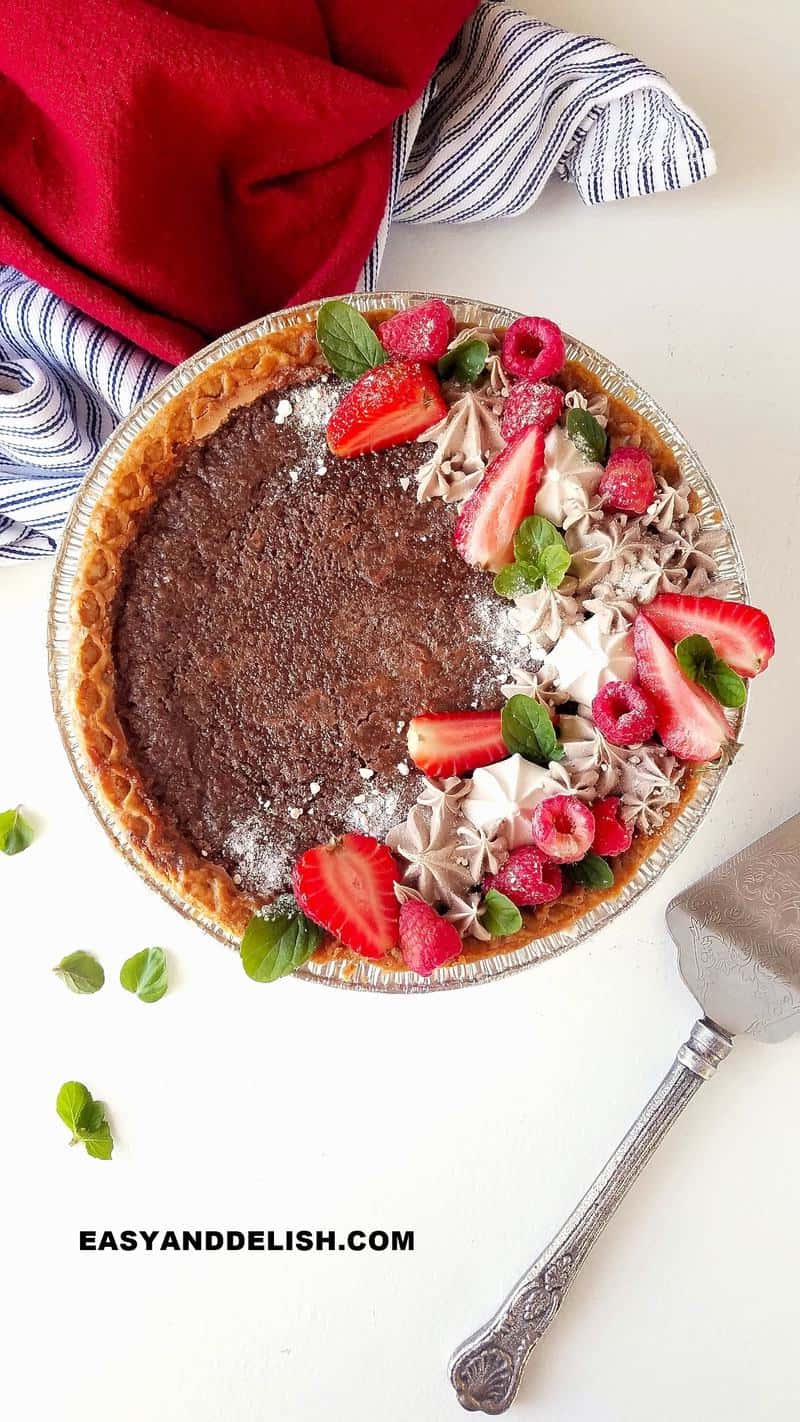 WATCH OUR QUICK VIDEO TO FIND OUT HOW TO MAKE THIS SOUTHERN CHOCOLATE CHESS PIE, STEP-BY-STEP!

Although several recipes make use of either term, they mean the same. Pre baking (or par baking) consists of baking an unfilled pie crust for a short amount of time to then fill it with a filling of choice and bake again to cook the filling. This is very common with one-crust pies that contain a custardy filling such as pumpkin pie or our chocolate chess pie.

When should you pre bake pie crust?

This happens when a pie crust and filling have different baking times and the crust usually needs to bake for longer. Pre baking gives it a head start. By the time you add the filling to the partially baked crust, both the crust and the filling will be done all at the same time.

But if you will add a no bake filling, the pie crust will need to be completely baked and to be then filled. This is common for ice cream pie or pudding pie, where the filling doesn’t need to be baked at all.

How to pre bake pie crust?

Some recipes calls for lining the pie crust with either foil or parchment paper and then place weights (such as dried beans or rice) over (about 2/3 full). This will hold the dough in place when baking because the crust tends to puff up in the center and down the sides of the pan.  After partially baking the crust, you will have to remove the weights and bake for a few more minutes because the bottom will not be the same as the sides.

Others ask for pricking the bottom and sides of the pie crust with a fork to help the crust not puff up so much when baking. I prefer the latter because it will avoid to take the pie crust back to the oven for additional baking time and still will mostly hold the pie shape.

How long to pre-bake pie crust?

Most store-bought pie crusts come molded onto a disposable pie plate and have instructions on how to pre-bake the crust. Follow them! It will make a difference depending on whether the pie has an all-butter crust, lard, or a mixture of both as well as the brand. But no matter the differences, for a crispier crust, brush the crust especially in the bottom with a mixture of water and beaten egg whites. It will avoid a soggy bottom. 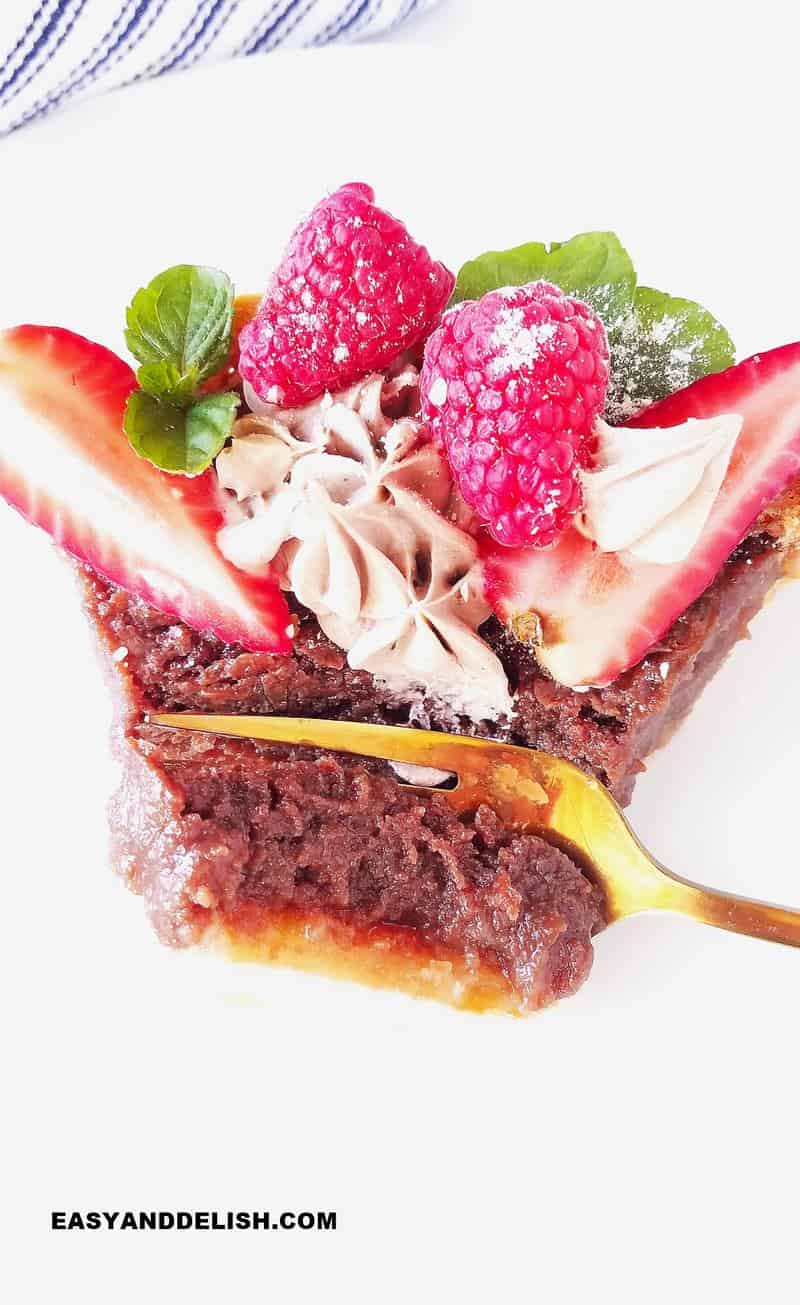 Can I use store-bought crust?

Yes! I used in mine cutting back the time to prepare this pie considerably. Just choose one that you enjoy. I prefer all-butter crusts because they are more flavorful and form a particular brand. Make sure to the package instructions to pre bake it and for a crispier crust, brush a mixture of beaten egg whites and water especially in the bottom.

You can store chess pies at room temperature for up to 2-3 days, covered.  Or you can chill it in the fridge, covered, for up to 5 days. The longer it sits, the intenser will be the chocolatey flavors. Freezing is not recommended because it will alter the texture of its custardy filling, but if that is not a problem for you you may freeze it for up to 2 months, well wrapped.

What do I serve with chocolate chess pie?

Chocolate chess pie has an intense flavor on its own. A dollop of unsweetened whipped cream or some fresh berries makes great garnishes to cut back on the sweetness and also rich flavors.

What should I do if my chocolate chess pie doesn’t set up?

The pie should bake until the top is crackly and it jiggles slightly in the center. If the pie is runny after cooling completely, chill in the fridge until it firms up.

Is that ok if the top of my chocolate chess pie cracks?

A little cracking is part of the character of the pie and somehow expected because the filling will rise when baking and then it will sink as it cools down. You may disguise with a dust of confectioner’s sugar on top or garnishing with berries as I did. 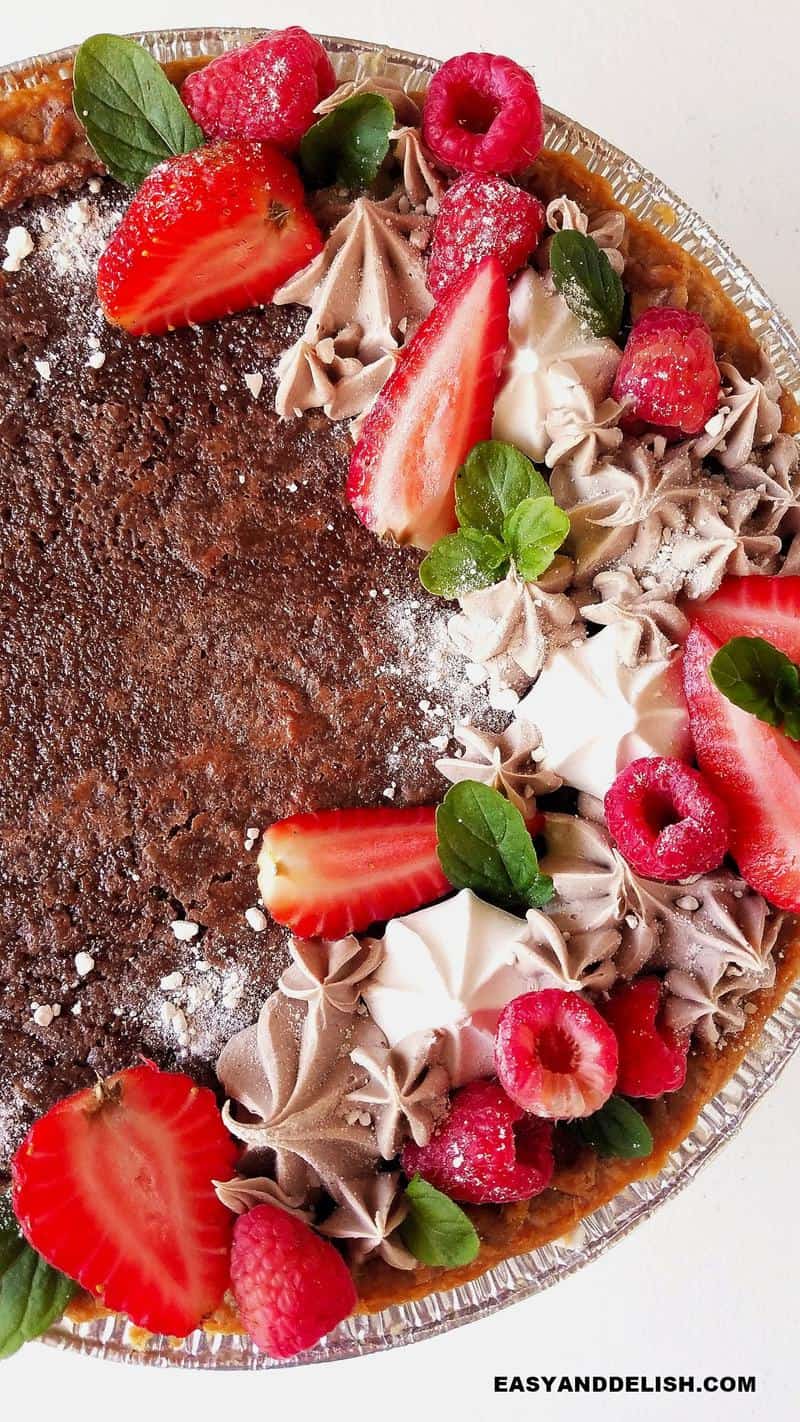 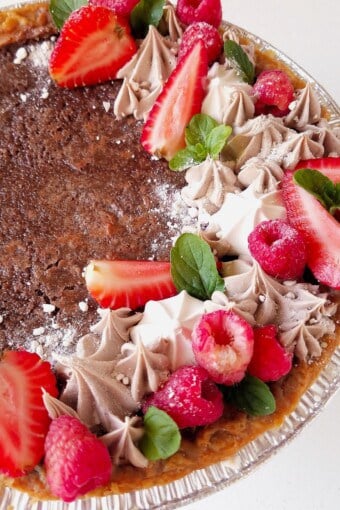 STORAGE You can store chess pies at room temperature for up to 2-3 days, covered.  Or you can chill it in the fridge, covered, for up to 5 days. The longer it sits, the intenser will be the chocolatey flavors. Freezing is not recommended because it will alter the texture of its custardy filling, but if that is not a problem for you you may freeze it for up to 2 months, well wrapped.

** The nutrition labels on easyanddelish.com are for educational purposes only. This information is provided as a courtesy and is only an estimate, since the nutrition content of recipes can vary depending on the brand or source of the ingredients, portion sizes, recipe changes or variants, as well as other factors. We suggest making your own calculations using your preferred calculator, based on the ingredients that you use or consulting with a registered dietitian to determine nutritional contents more precisely.

Please note that health-focused and diet information provided on easyanddelish.com is for educational purposes and does not constitute medical advice, nor it it intended to diagnose, treat, cure, or prevent disease. Consult with your doctor or other qualified health professional prior to initiating any significant change in your diet or exercise regimen, or for any other issue necessitating medical advice.