Published: Jan 30, 2020 · Modified: Jun 6, 2020 by Denise Browning · "This post may contain affiliate links which won’t change your price but will share some commission." · 9 Comments

Farofa is a buttery, toasty, and addictive gluten-free Brazilian side dish made with cassava flour that you didn't know that you needed in your life. It's served along with feijoada and barbecue. So good! 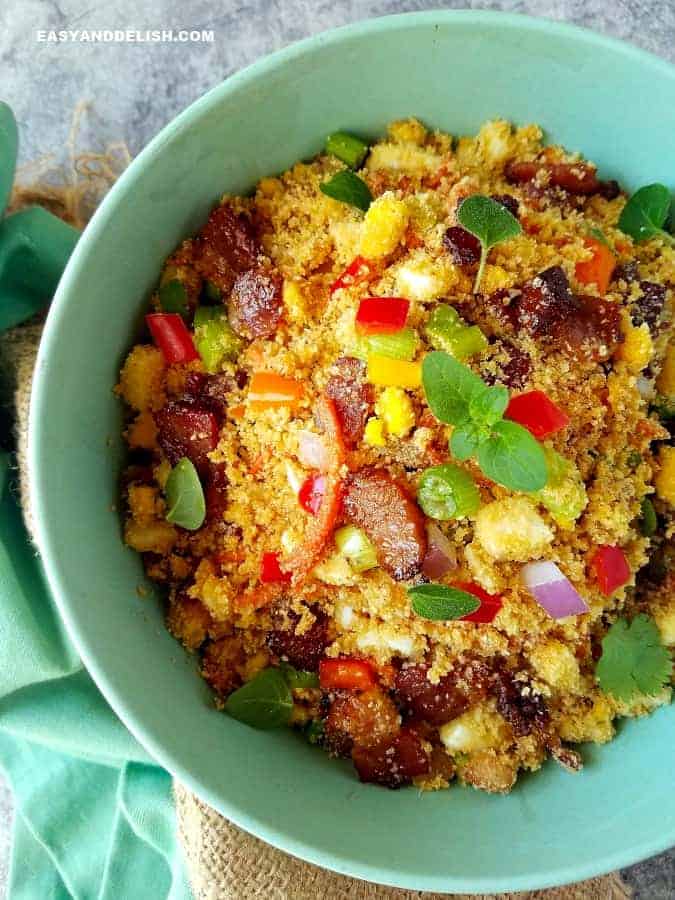 It’s something else that you didn’t know you needed until you put it in your mouth and are stunned by it.

That something is called FAROFA. But it also comes as a naughty SLANG term, too. Curious? Keep on reading... J

Farofa (pl. farofas), the food, is a gluten-free traditional Brazilian side dish made of toasted yucca/cassava flour (farinha de mandioca in Portuguese). Sometimes it is mixed with bacon, veggies, and eggs, and other times it’s prepared with shredded carrots, raisins, and diced bananas. There are many variations to the dish but overall it has a crunchy texture similar to bread crumbs!

But in Portuguese “farofa” can also be a slang word. This is a derogatory term for a cheap day trip to the beach in which low-income people who plan to spend the day pack a lunch bag full of farofa to go with a container of chicken– a cheap option. They are called farofeiros.

In the mid 1980’s, the Brazilian band Ultraje a Rigor had an instant hit with the song “Nós Vamos Invadir Sua Praia” (“We’re Gonna Crash Your Beach”), which pokes fun at the fear that more affluent beachgoers had of the farofeiros.

The plain, classic Brazilian farofa is usually made by toasting cassava/manioc flour with butter and spices such as salt, pepper, and cumin. It is buttery, toasty, and quite savory! But it has regional variations. In Bahia, e.g., the cassava flour is toasted with dendê oil, giving it a yellowish-orange color and smoky taste. The fact is, the dry manioc/cassava flour calls for plenty of fat – whether that is oil, butter, or the rendered fat of bacon, soaking up the flavor of the ingredients that go into it.

WHAT IS YOKI FAROFA TRADICIONAL?

Yoki Farofa Tradicional is the store-bought version of homemade farofa, widely sold at Brazilian grocery stores.   It is also known as ‘Farofa Pronta’ (‘Ready-to-Eat Farofa’) usually eaten by those who don't have the time to make farofa from scratch.

WHAT IS MANIOC FLOUR?

Manioc flour, also known as cassava flour, is a dry and coarse flour extracted from the manioc/cassava root, a close relative of ‘garri’ from West Africa. It is white in color and has no taste. It’s also the ingredient that makes farofa, which is often served as a side for Brazilian feijoada, grilled meats, picanha, and even hearty stews as picadinho. Brazilians also eat farofa sprinkled on black beans.

IS TAPIOCA AND CASSAVA THE SAME THING?

As this article about cassava, its importance, and derivatives explains: “The detoxified cassava is ground to a pulp called massa and then squeezed with a device (tipiti) to extract the moisture. The liquid produced by this may be collected and dried to produce tapioca, locally known as polvilho. Lastly, the dried massa is then toasted over a large copper stove to produce the manioc flour. This process varies regionally and by manioc species, and may include additional steps of re-soaking, drying and re-toasting the flour.”

Cassava is a vegetable root rich in carbs, calories, and key vitamins and minerals. It is a good source of vitamin C, thiamine, riboflavin, and niacin.

Yes, it is gluten-free as well as grain-free and nut-free, vegan, vegetarian, and paleo. It is a derivative of the cassava root vegetable which is gluten-free, similar to potatoes, yams, and sweet potatoes.

IS CASSAVA AND CASSAVA FLOUR GOOD FOR DIABETICS?

Cassava is high in “resistant starch,” which is a type of dietary fiber considered good to digestive health. Resistant starch has also been studied for its potential to reduce the risk of type 2 diabetes and obesity.

This is due to its ability to improve glucose control by reducing the blood sugar response when it substitutes for flour in foods. Plus, it plays a role in reducing appetite and increasing fullness, thus helping to promote weight control.

Cassava flour (or farofa flour) has a long indigenous legacy and has been important for Brazilian Cuisine for centuries.

It served as a cheap source of carbs for the Portuguese explorers and for African slaves during colonial times. It was even brought over as a trade product from Brazil to Africa.

Cassava flour is the main ingredient in the farofa recipe, as well as one of the ingredients of pirao (a fish or beef broth gravy). It may be sprinkled on top of beans or mixed with beans to form a patty, making what is regionally known as “capitao”.

Once used to make farofa, it makes one of the best sides for feijoada, Brazilian barbecue, picanha, and hearty stews like picadinho and bobo. It is also one of the Christmas side dishes that is served along with roast brined turkey (peru) or honey baked ham (tender de porco) in Brazil.

HOW TO MAKE FAROFA 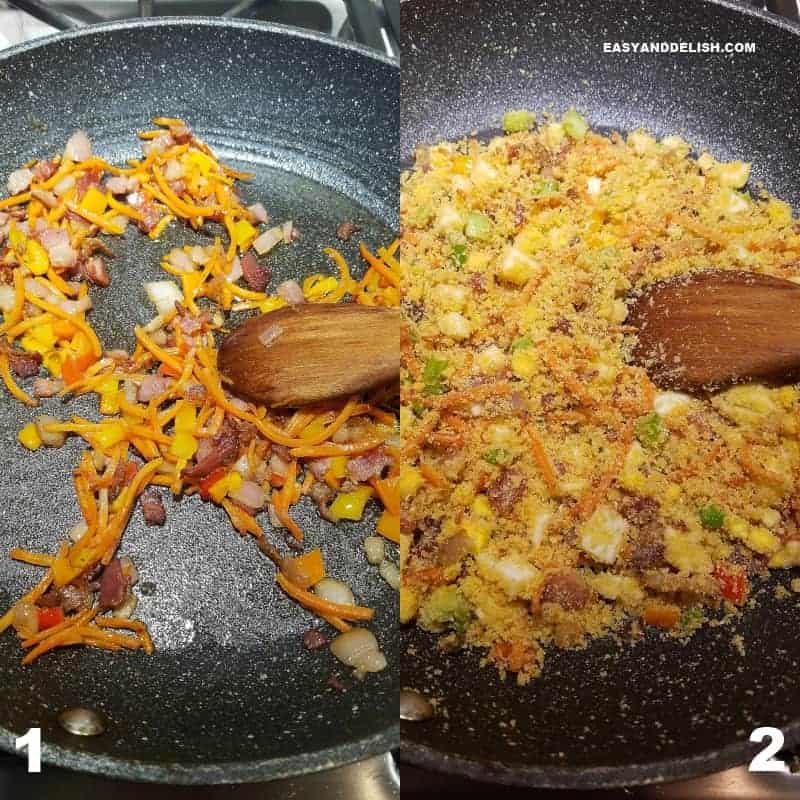 To make this farofa recipe, start by heating a large nonstick skillet over medium-high heat. Add the bacon and let it cook for about 3-5 minutes, or until it starts to brown. For a vegetarian farofa, skip the bacon and sauté the veggies in oil and/or butter (use double of the fat amount called for in the recipe) and follow the rest of the recipe.

Reduce heat to medium and add the onion, bell pepper, and carrot. Cook until onion softens (about 3-5 minutes), stirring every now and then. Add butter and let it melt (SEE PIC.1).

Stir in the cassava flour well until toasted and mixed with the bacon and veggies (SEE PIC.2). Season with salt and pepper to taste (and  a pinch of cumin if you want to).

Then, reduce the heat to medium-low and let it toast for 1-2 minutes, stirring often to toast evenly. Stir in the eggs and parsley. Serve warm.

Store homemade farofa in an airtight container in the fridge for up to 3-5 days. Freeze it without the eggs and fresh herbs in freezer bags (remove most of the air) for up to 2 months.

WHAT DISHES GO WITH IT? 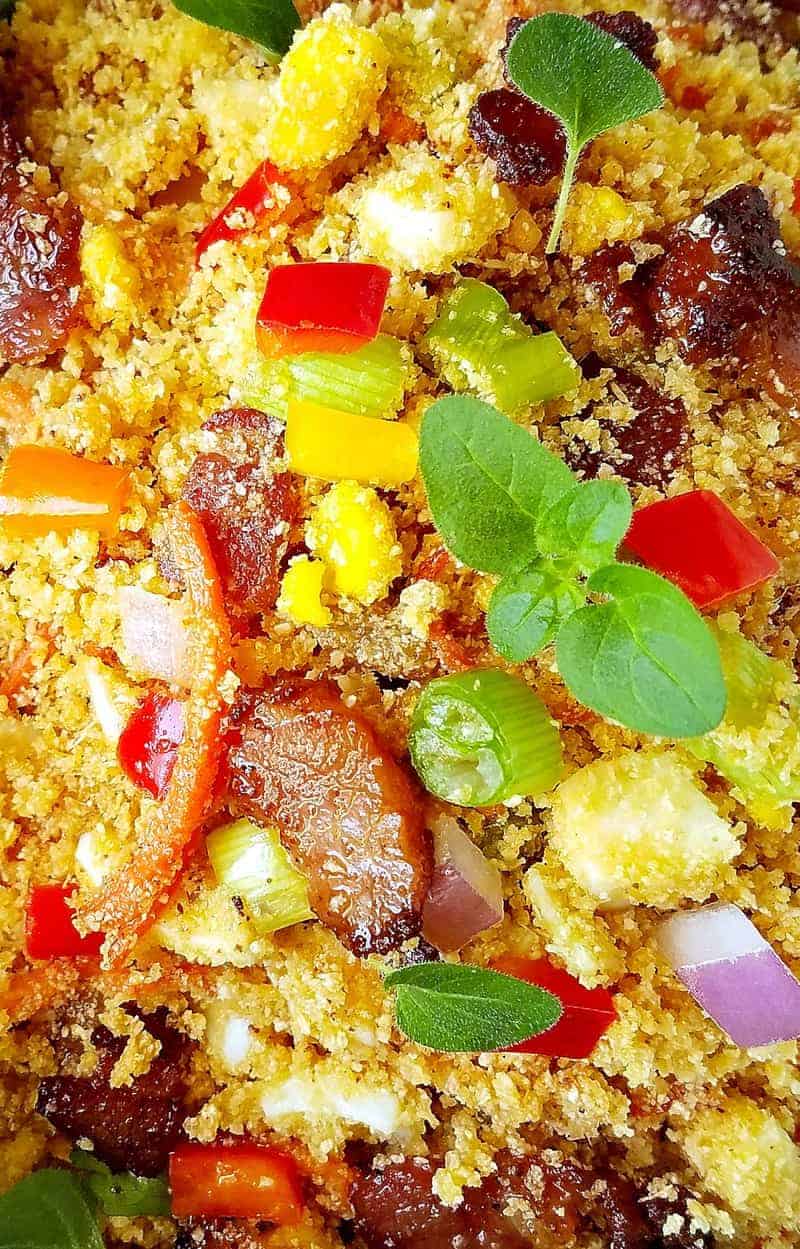 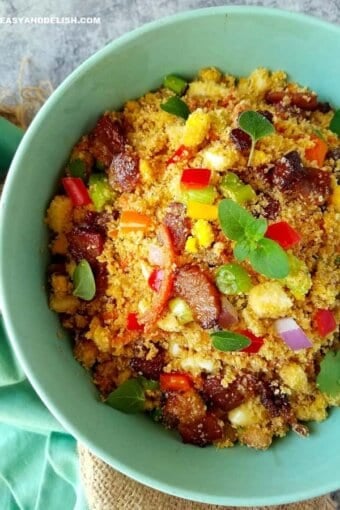 Farofa is a buttery, toasty, and addictive gluten-free Brazilian side dish made with cassava flour that you didn't know that you needed in your life. It's served along with feijoada and barbecue. So good!

DID YOU MAKE THIS RECIPE?Comment and rate the recipe. Also follow us on Pinterest at @easyanddelish for more delish recipes.
« How to Make Shortbread Cookies (Easy, 3-Ingredient)
Honey Garlic Butter Shrimp Skillet Recipe (5-Ingredient) »