Grilled cheese sticks are a quick yet healthy snack or starter that can be served with honey, molasses, or chimichurri sauce. Plus, get the list for the best grilling cheeses. 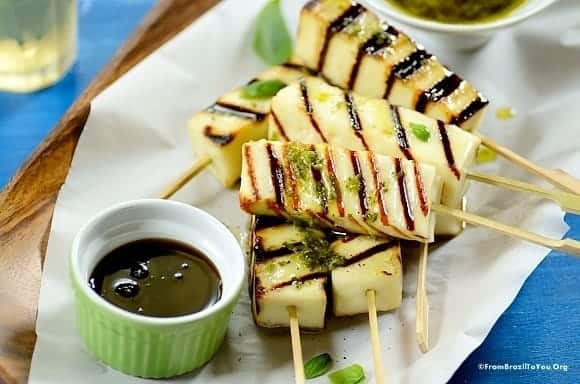 Summer is THE grilling season… from meats, fruits, and vegetables to cheeses: nothing can escape my grilling addiction! 😉

Our latest grilled treats are these quick and tasty grilled cheese sticks to enjoy as a healthy snack or to serve as an starter.

As a bonus, I prepared for you a useful list of the best cheeses for grilling, including only the ones that hold their shape  well over flame.

Grilled cheese sticks is a cheap snack in Brazil… so popular, that it is available from vendors both on the streets and at the beaches.

In my home state, Pernambuco, it is often eaten with mel de engenho (molasses)…

…. while in southern Brazil we serve grilled cheese sticks with chimichurri sauce or simply brushed with a mixture of olive oil, garlic and oregano.

If you are not a big fan of molasses, with its sweet yet slightly bitter after-taste and strong aroma, use honey, maple syrup or any other syrup of your choice.

If you are not sure what sides to serve, I suggest setting the platter with a portion of molasses or honey (sweet side) and another of chimichurri sauce (savory side). 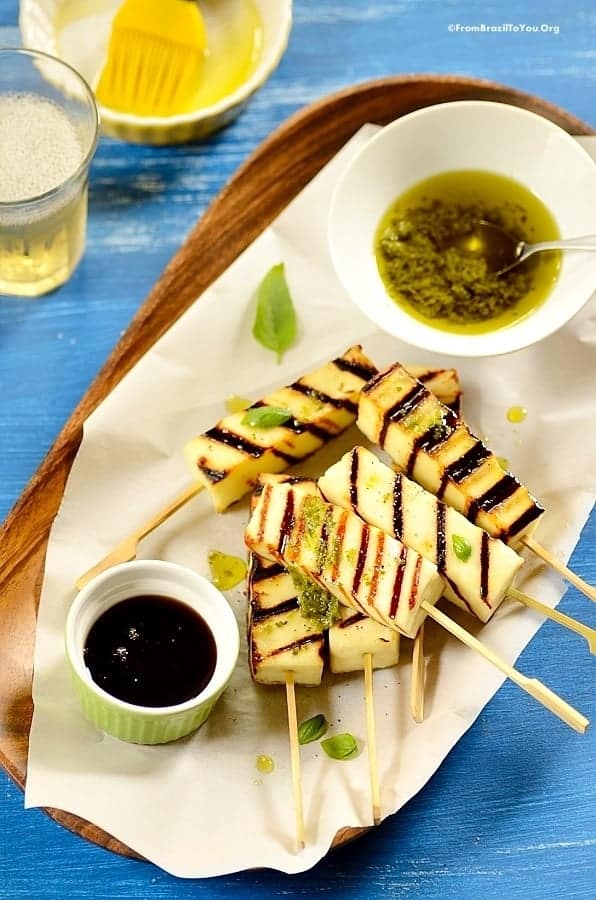 Back in my home country, we use either queijo de coalho (rennet cheese) or queijo de Minas frescal (fresh Minas cheese) for grilling.

Aware these are not readily available in the U.S. and many other countries, I quickly found some great subs here to maintain my tradition of grilling.. 🙂

Some of the cheeses on this list are found at local American supermarkets, Indian and Middle Eastern stores, or Whole Foods, where I bought mine.

Some are more affordable than others, but all achieve a nice golden-brown exterior and hold their shape well under high heat.

HOW TO MAKE GRILLED CHEESE STICKS

f using paneer cheese, taste it first. If needed, sprinkle salt on top of the sticks after grilling or brine in salty water and pat the sticks dry before grilling. Paneer is low in salt.

If using halloumi cheese, soak sticks in cold water for about 30-60 minutes and then pat dry before grilling because halloumi is quite salty.

Grill cheese sticks on a griddle (or grill) brushed with vegetable oil at medium to medium-high heat for about 2 minutes per side or until forming grilling marks.

Garnish cheese sticks with chimichurri sauce (the South American pesto) or with molasses or honey.

A salty, semi-hard goat and sheep milk cheese from Cyprus — with a high melting point that makes it suitable for grilling.

When fresh, it is dense with a raw taste, but once grilled or pan-fried, its exterior turns crispy and golden-brown, while the inside softens without melting.

But due to its salty brine, soak in water for about one hour and then pat dry before grilling in order to more closely resemble queijo de coalho.

But halloumi may be expensive. I am sure it is much more economical at Greek markets than at Whole Foods.

It is a fresh, non-melting cow’s milk cheese common in India, Nepal, Bangladesh, and Pakistan. Paneer is firm enough to hold its shape once grilled.

Because some varieties contain very little salt, it is best to taste it first.  If needed, brine it in salty water and then pat dry before grilling.

It is nearly half of the cost of halloumi cheese, and is available at Whole Foods, some local supermarkets, and of course, Indian markets. 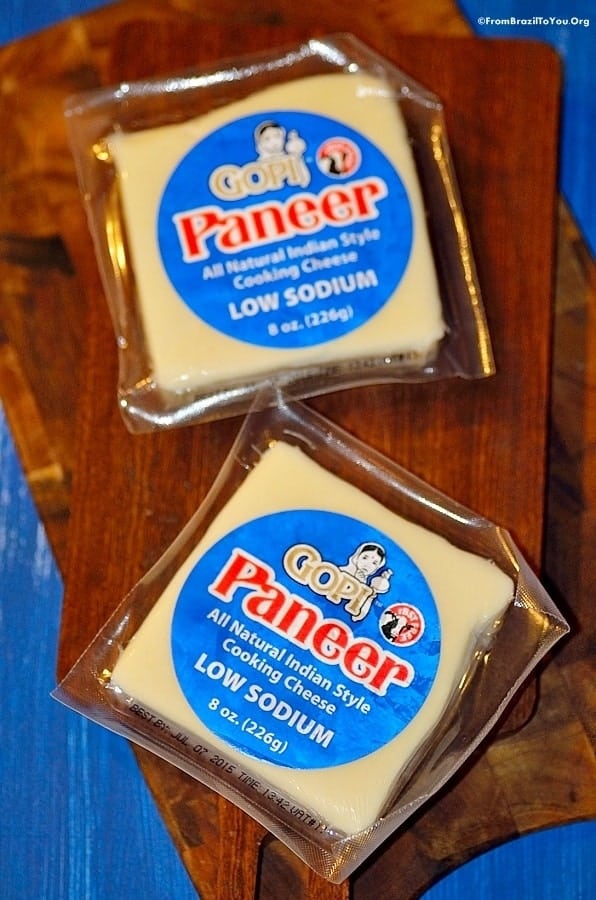 This is a hard, salty yellow cheese made from sheep’s milk and/or goat’s milk in Greece and Cyprus.  Because it has a high melting point, pan-fry or grill it without turning into a gooey mess.

It is saltier than halloumi and needs to be de-salted by soaking in a couple of changes of fresh water and then pat dry before grilling.

Buy it in specialty stores and at Greek markets. It prepares a traditional Greek appetizer called saganaki, a flambéed fried cheese prepared in a small frying pan.

Its other related cheeses are graviera, kefalograviera, halloumi, and kasseri.

This Latin odd cheese can be regularly seen in the Central and South American cheese section at local grocery stores.

Although it’s not a traditional cheese, it is manufactured to have the properties that make it ideal for grilling because it browns on the outside while keeping its shape.

It has a mild taste, making pico de galho, chimichurri sauce, or molasses great options to serve with.

It is a Northeastern Brazilian rennet cheese with a firm yet lightweight cheese and an almost “squeaky” texture when bitten into.

It is a very popular, cheap, skewered snack for street-eaters and beach-goers in Brazil.

Although Northeastern Brazilian also enjoy raw queijo coalho, it is ideal for pan-frying or grilling because of its high melting point.

Once grilled, it develops a great golden surface without melting much. Another plus is that it doesn’t need to be de-salted or brined before grilling.

It’s my favorite cheese for grilling, but unfortunately it is not easily available in the US. You can try to order it online.

Translated as Minas cheese, this is a type of cow’s milk cheese that has been traditionally produced in the Brazilian state of Minas Gerais.

It matures naturally in open air, or much less often, over a cooker to dry with heat. Serve the variety frescal (fresh) with goiabada or guava paste (the combo is called Romeo and Juliet) or doce de leite (dulce de leche).

Or, use to pan-fry or grill, developing a golden surface while keeping its shape. It is not easily available in the US either.

Queso Panela is a Mexican grilling cheese made from cow’s milk. It is white, fresh and smooth! Enjoy it fried or grilled since it holds its shape and doesn’t melt easily.

It is versatile and enjoyable in nopal salads, quesadillas, tacos, etc. Just grill it for one or two minutes on each side.

Ragusano is a Sicilian cheese made from  raw cow’s milk. As it ages, it has a distinct spicy ﬂavor that goes well with herbs and olive oil. Just pan fry it with a light drizzle of olive oil over low heat until it begins to soften.

Juustoleipa is a cow’s milk cheese produced in Finland and Sweden. It’s also known as “Bread Cheese,”because its crust-like appearance that is similar to a loaf of bread. Grill it at a medium heat and serve with jam.

Although some include provolone within the list of grilling cheeses, it’s not a 100% grillable cheese. Why?

It may not melt so quickly on the grill but after certain time it does not hold its shape that well. Perhaps a a better quality than the deli version, such a hard provolone, holds its shape better.

Kasseri is a Greek cheese made from sheep’s milk. It’s tangy, salty, and semi-hard. Some include in the grilling cheese list, but the truth is kasseri is not a grilling cheese. It melts faster than a regular provolone.

Both melts on the grill. You may find some grilled camembert or grilled brie recipes online, but the truth is these cheeses do NOT hold their shape under fire.

Some even wrap them in foil or grill them on a plank to avoid the gooey mess on the grill grate.

This is by no means a complete list.  I am sure there are more cheeses that one can use for grilling, but the question is how well these others would hold their shape under high heat.

If you are asking how many calories are in a grilled cheese, it depends on the cheese! See the grilling cheese recipe below. 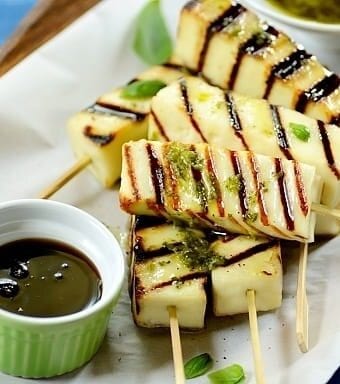