Shrimp in creamy yuca sauce (Bobó de Camarão) is an easy seafood stew made with vegetables, coconut milk and mashed yuca. It can be served with white rice. 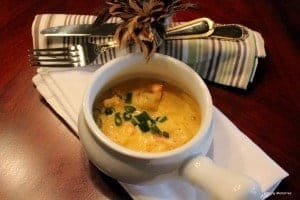 I am sharing with you today one of my favorite stews: the rich Bobó de Camarão or Shrimp in Creamy Yuca Sauce.

Just as any other dish from Afro-Brazilian cuisine, bobó has soul! It originates from Bahia, the state with the largest number of black African descendants.

Unique like its people, Bahia has the most exquisite cuisine in Brazil, which evolved when cooks improvised on both traditional African and Portuguese recipes by using locally available ingredients. Its differences from all of the other regional cuisines of Brazil set it apart completely.

Other typical Bahian dishes include moqueca (shrimp stew), vatapá (a savory stew made of dried shrimp– a thickened version of which is often served as a filling for acarajé patties), acarajé (Brazilian falafel or fritters made with black-eyed peas and dried shrimp), caruru (okra stewed in coconut milk), abará (Brazilian tamale made with mashed black-eyed peas and wrapped in banana leaves), and even feijoada, which has been the national dish of Brazil for more than 300 years.

Like most dishes from Bahian cuisine, bobó is prepared with the three ingredients referred to as the “Holy Trinity of Bahian cuisine”– coconut milk, malagueta pepper (its heat level is about the same as Tabasco peppers), and dendê oil (a heavy oil extracted from the fruits of an African palm tree, that adds flavor and also a bright orange coloring to foods).

Well, ladies and gentlemen, without further ado I present to you the best of the best: Its Excelency, Shrimp in Creamy Yuca Sauce or Bobó de Camarão. 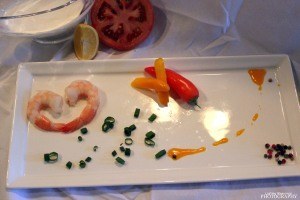 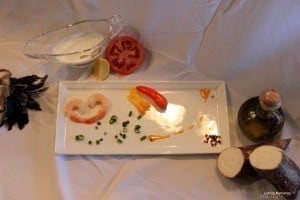