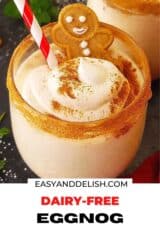 This dairy-free eggnog is creamy and made with pasteurized eggs, spices, dairy-free milk, canned coconut milk, and sugar. For a keto, Paleo, or sugar-free eggnog, just use a sugar-substitute and celebrate the holidays without breaking your diet. It tastes like Christmas! 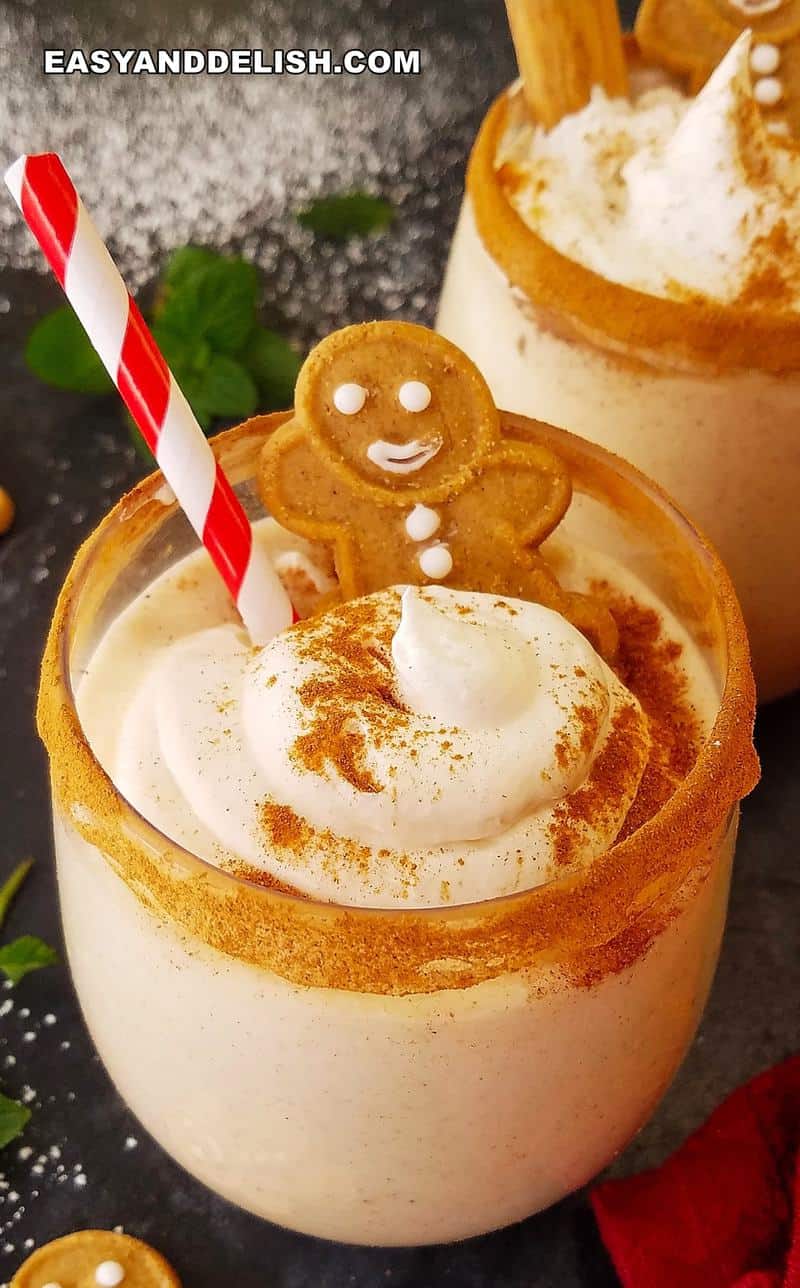 How about a homemade beverage or cocktail drink to will bring Christmas cheers?

It is sure to please everyone with its warm flavors and creamy consistency. Besides being delish, it’s quick and easy to make in the blender in less than 5 minutes.

Let’s make it together, shall we?

Eggnog is a festive holiday drink enjoyed around the world. It has its roots in a medieval European drink called “posset” (made with hot, sweetened, spiced milk spiked with ale or wine).

In the 17th century, sherry replaced ale or wine. Due to its scarce ingredients at that time (milk, eggs, and sherry), posset became a drink enjoyed on special occasions such as holidays.

Traditionally, eggnog is a dairy-based punch. It combines ingredients such as heavy cream, sugar, and milk with raw, whipped eggs. Sometimes, it incorporates distilled spirits, such as bourbon, whiskey, or brandy— alone or in combination.

Eggnog is usually served chilled but may be warmed up on chilly nights. I prefer to serve my dairy-free eggnog chilled!

The taste of homemade eggnog may depend on the country where you are drinking it!

American traditional eggnog is creamy, sweet, and has a warm flavor of spices and vanilla. If using brandy, bourbon or cognac, the spiked eggnog acquires a boost of flavor!

A traditional American recipe tastes sweet with notes of vanilla and bears a frothy and creamy texture from the eggs. More contemporary takes add warm spices like cinnamon and nutmeg.

Puerto Rican has its own version called coquito, made with coconut milk or juice with or without the addition of heavy cream. Some modern version, leave the eggs out.

Mexico has the famous rompope, which comes from the Spanish “ponche de huevo” (egg punch). A mix of almond paste and milk replace the heavy cream but it includes vanilla and cinnamon plus sometimes brandy.

In my home country Brazil, the eggnog drink is called gemada. It calls for warm milk, egg yolks, sugar, and cinnamon. A spirit such as cachaça, Brazil’s national spirit, may be added to the drink.

On the other hand, Peruvian eggnog, called biblia con pisco, asks for pisco, a type of Peruvian brandy.

In Venezuela and Trinidad, there is a variety called ponche crema prepared with rum while in Germany eggnog (biersuppe) calls for beer. 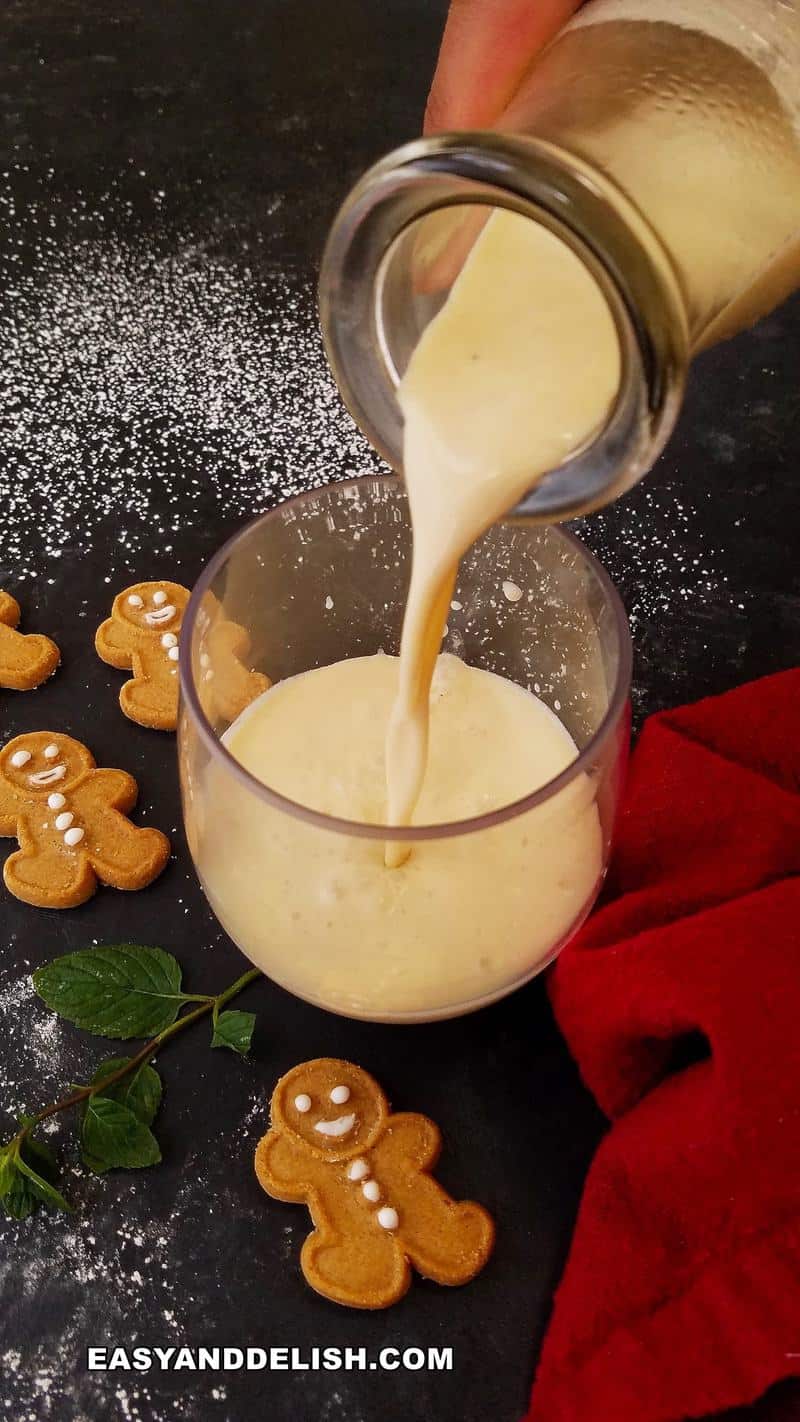 Although eggnog is a Christmas drink, you can make it with budget-friendly basic ingredients. It is one of those great pantry recipes that are quite handy!

To make this dairy-free eggnog recipe, you will need the following:

How to Make Dairy-Free Eggnog 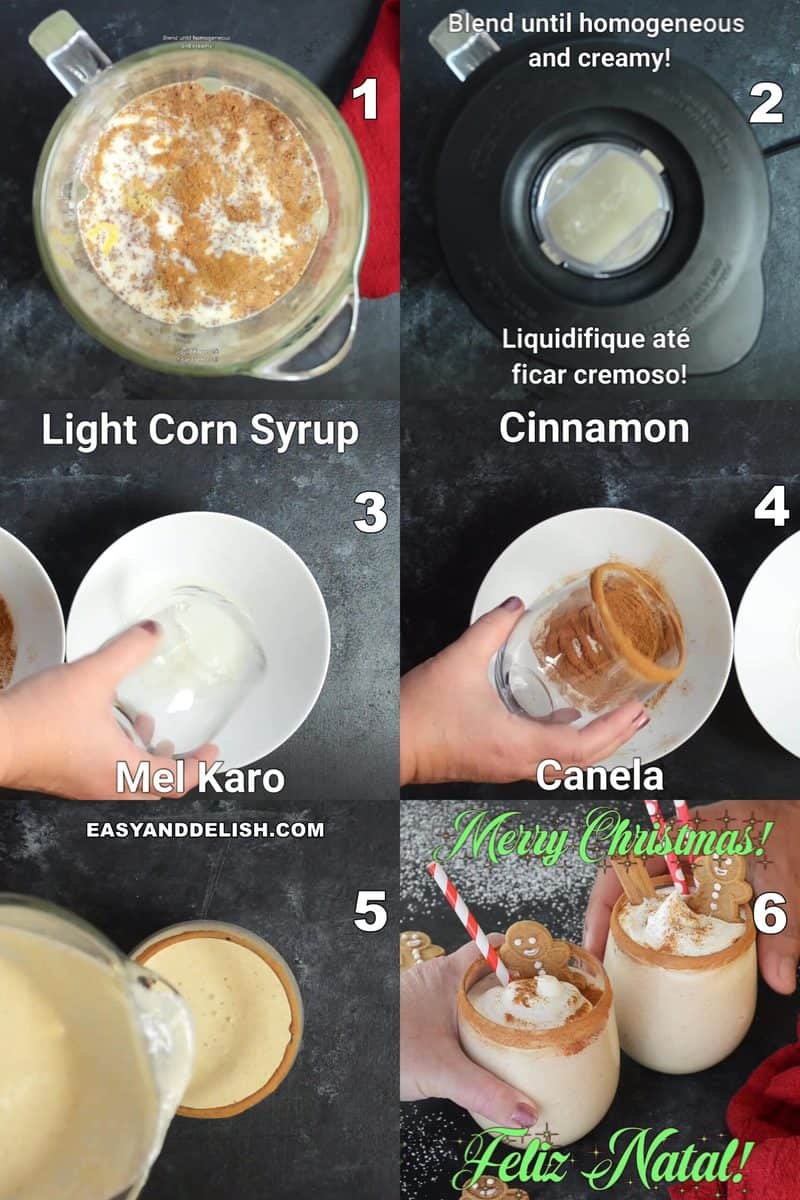 How to Temper Eggs

To temper the eggs to make eggnog safe to drink, heat the milk over medium-high heat with the cinnamon and nutmeg to let infuse the flavors.

Then, slowly stream the hot warm milk into the eggs, whisking well until the mixture is homogeneous.

Make sure to strain the mixture using a fine-mesh strainer to catch any egg lumps. To thicken, add the strained mixture to a pan and mix with the rest of the ingredients over medium heat until the mixture is thick and coats the back of a spoon. Test its thickness by running your finger down the middle. Eggnog is ready when the line stays clean! 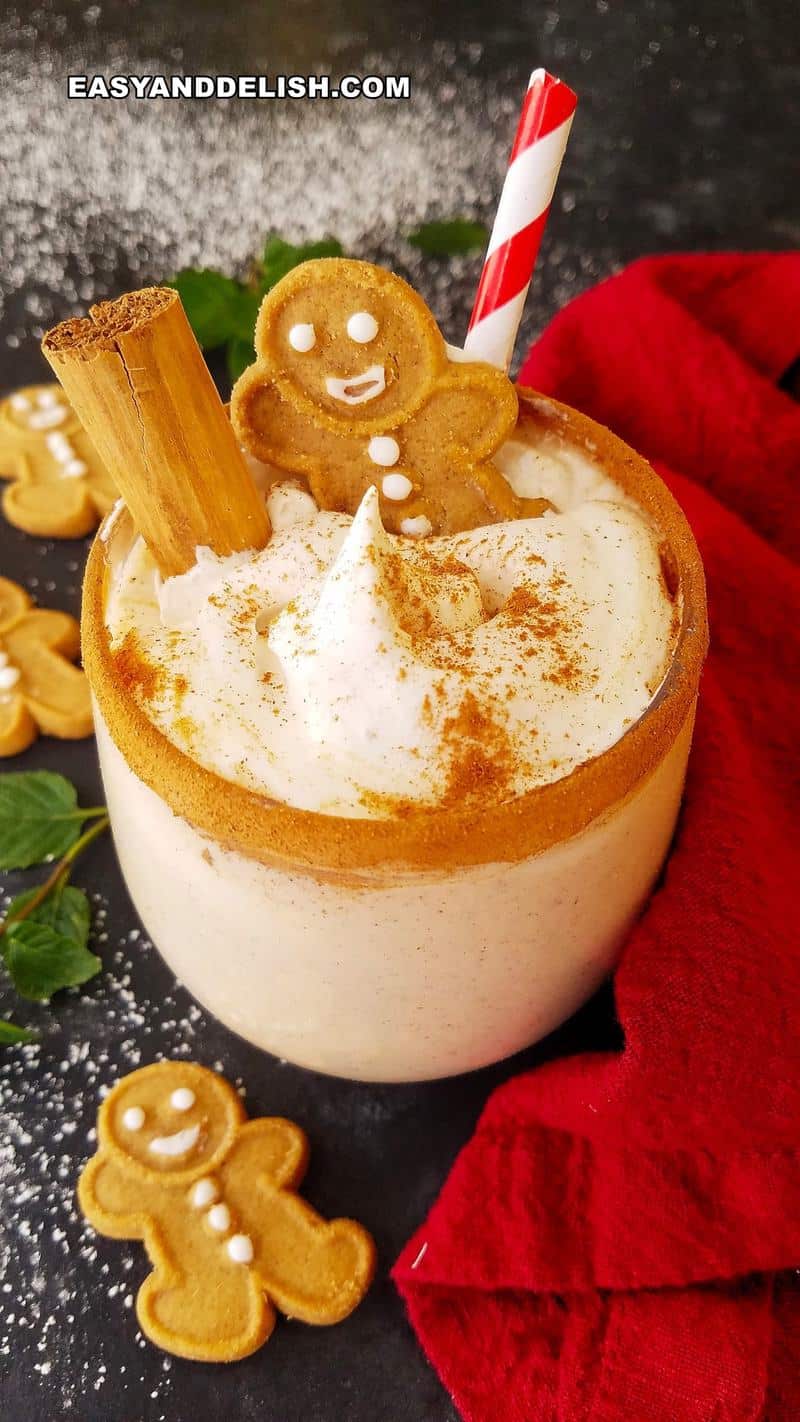 They are also the key ingredients for making the best eggnog drink because they thicken and emulsify the beverage.

However, raw eggs may pose a health hazard because of the bacteria Salmonella. Foodborne illnesses are a concern for people with compromised immune systems.

However, only 1 in 20,000 eggs produced per year could be contaminated in the United States.

Many believe that the alcohol content in eggnog can protect against Salmonella. Yet, there is not enough scientific evidence to support this!

The thing is a study conducted by 2 microbiologists found that the spirits in spiked eggnog killed off Salmonella after the drink was aged for 3 weeks under refrigeration below 40°F (4°C). But the same was not true when stored in less time.

To be safe, heat your eggnog before drinking it. A safe minimum cooking temp for eggs is 140°F (60°C). Whisk the egg yolks with sugar while heating the mixture to 160°F (71°C) in order to kill off most pathogens, or simply use pasteurized, or heat-treated, eggs.

Store-bought eggnog is pasteurized and does not require heating!

How to Store Sugar-Free Eggnog

This dairy-free eggnog will keep well in the fridge for up to 4 days. You may need to blend or whisk it well to incorporate milk solids before serving. Coconut milk can solidify quickly when chilled.

Unless you intend to make an eggnog ice cream, I wouldn’t freeze this drink; otherwise, the milk will break apart when thawed. To fix it, blend the thawed mixture in the blender again.

Other Holiday Drink Recipes to Try: 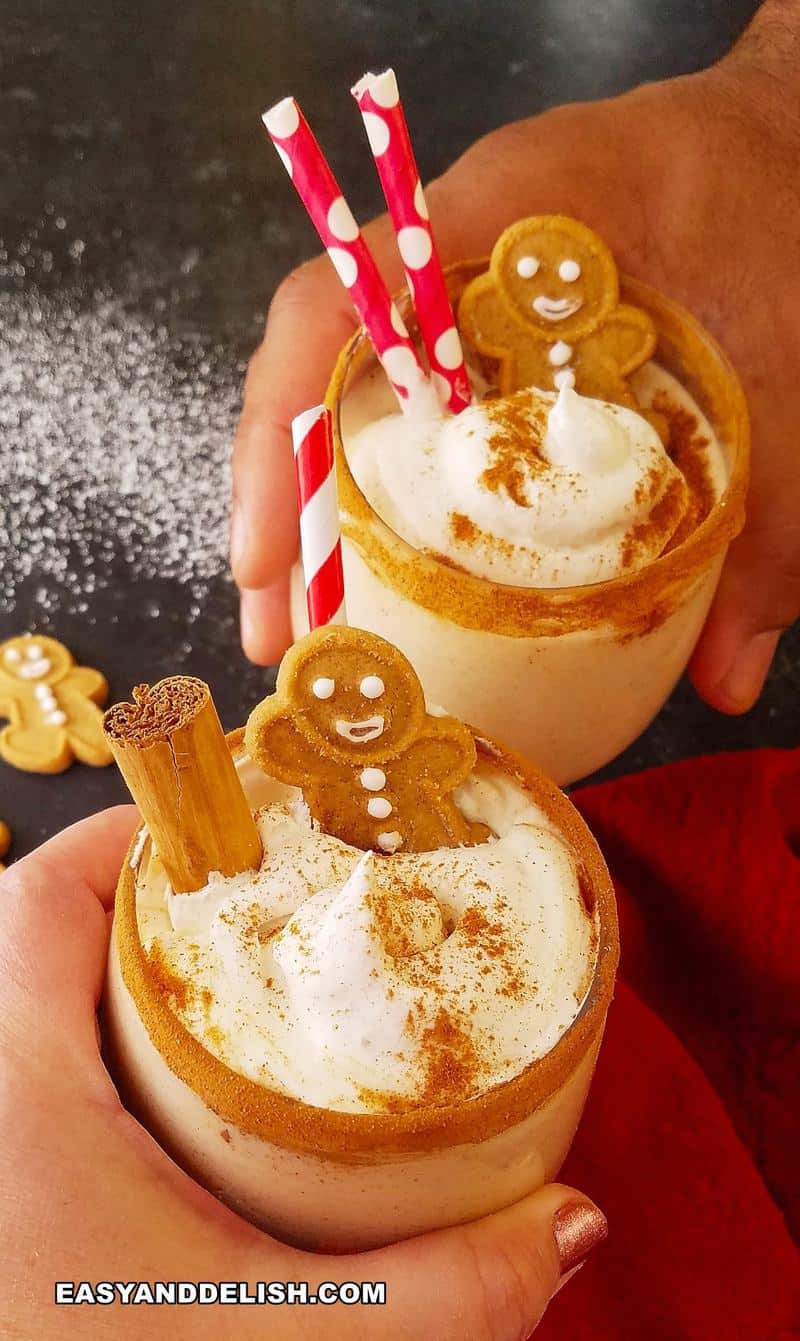 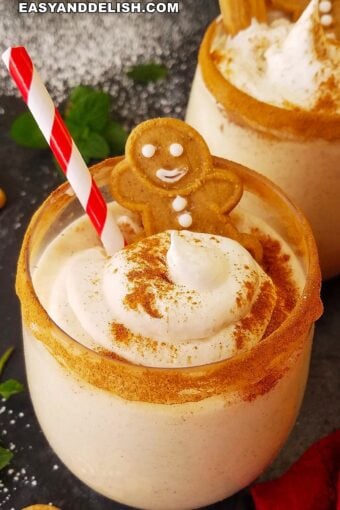 The nutritional values were calculated for a sugar-free drink using monk fruit.  How to Store This dairy-free eggnog will keep well in the fridge for up to 4 days. You may need to blend or whisk it well to incorporate milk solids before serving. Coconut milk can solidify quickly when chilled. Unless you intend to make an eggnog ice cream, freezing is not recommended; otherwise, the milk will separate when thawed. A solution would be to blend the thawed mixture in the blender again.