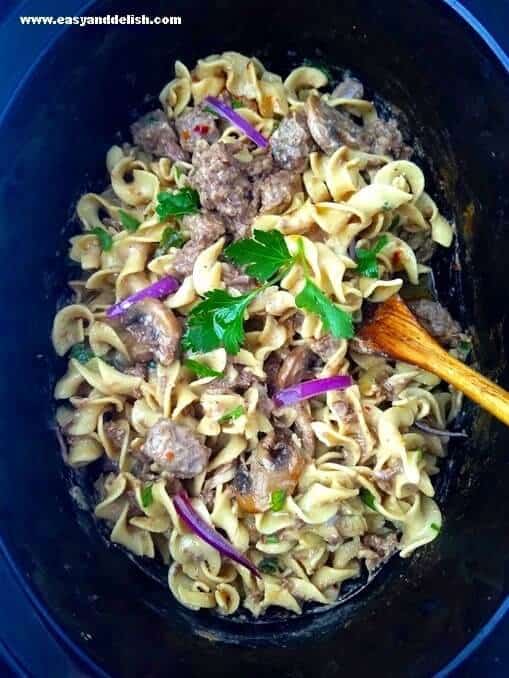 One of my goals this year is to put my slow cooker to use and make more healthy dinners.

As a result, I decided to start with a long-time family favorite: Beef Stroganoff!

But this recipe offers a plus above other recipes that you may find out there.

It’s the healthy recipe version of the classic, yet is just as yummy as the regular stew. This is not a  beef stroganoff with cream of mushroom soup.

It features tender lean stewed beef, low sodium broth, nonfat Greek yogurt instead of the usual sour cream, and has no flour.

Thus, it is gluten-free, low carb, and contains less fat than most online Beef Stroganoff recipes.

The result: a dish to enjoy all year round without stretching your waistline.

…if desired you could serve it over spaghetti squash for a keto or low carb complete meal. 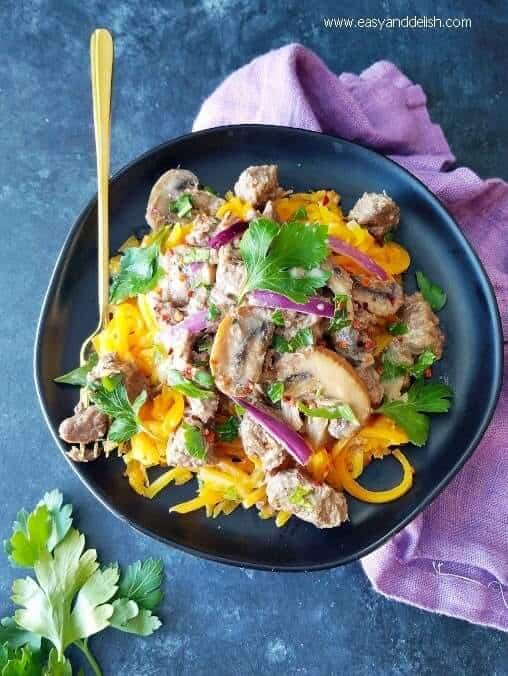 Or serve it with a hard-crusted bread or any other side of your choice.

What does the Word Stroganoff Mean?

The word stroganoff comes from a French mustard for seasoning beef according to the “A Taste of Russia” cookbook.

What Cuts of Beef is Best for Beef Stroganoff?

If making on the stovetop, use more tender cuts of beef such as:

Why? Because it will reduce the cooking time to 30-45 minutes and wiill render a tender meat stew.

But if you are making the recipe for beef stroganoff in the slow cooker, you may use more affordable, tough cuts of meat such as:

Tools for Making Beef Stroganoff in the Slow Cooker

How Long to Cook Beef Stroganoff in a Crock Pot?

You may cook this recipe for slow cooker beef stroganoff on HIGH for 4 hours, or LOW for 6-8 hours.

How to Make Slow Cooker Beef Stroganoff from Scratch 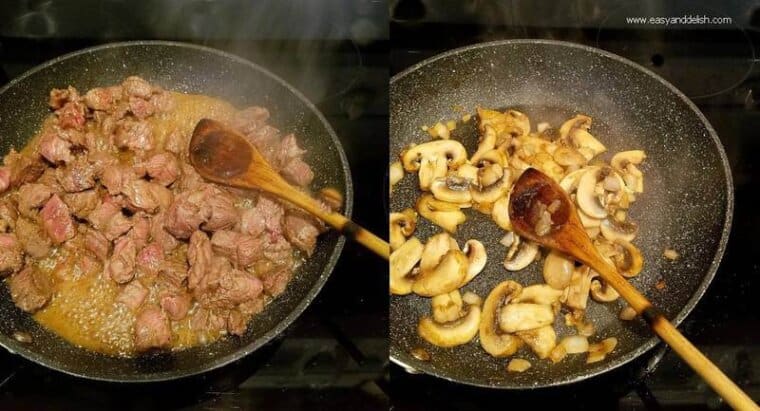 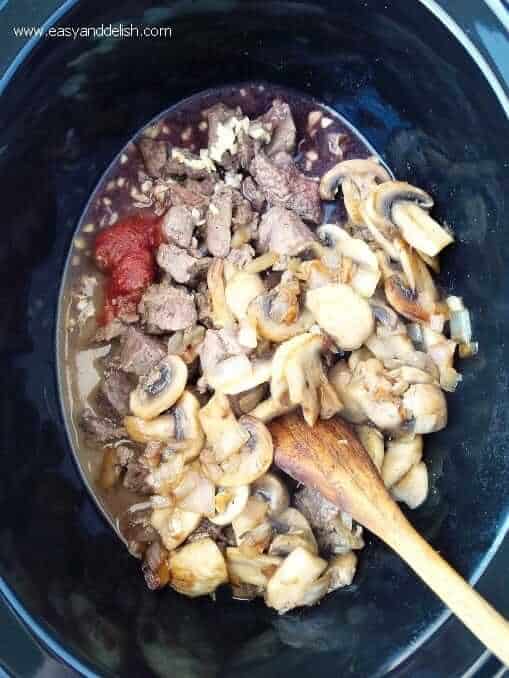 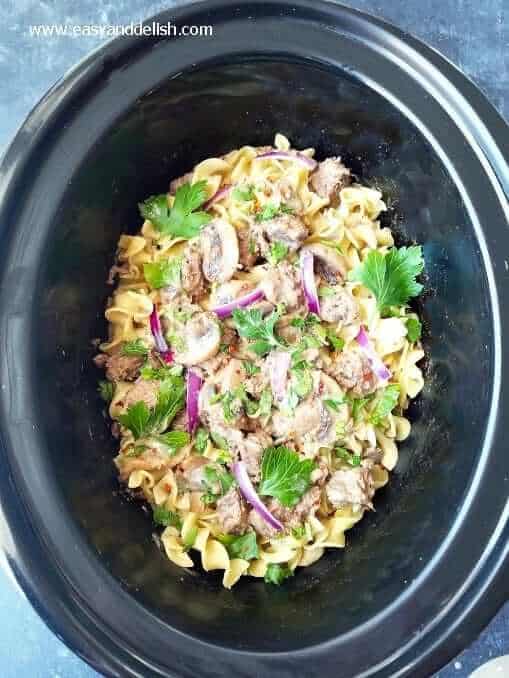 Can Crock Pot Beef Stroganoff Be Made on the Stovetop?

Yes! But be aware that to cook beef stroganoff on the stovetop will take about 45-60 minutes to cook and will need to use a more tender cut of beef.

Ours is the healthy version of the classic Stroganov, which is a 19th century Russian dish.

The old version consists of sautéed pieces of tender beef (tenderloin/sirloin steak) served in a sauce with sour cream!!!

The dish has become popular all around the world.

…in addition, of course, to a diverse group of sides.

But egg noodles are among the most common sides in the U.S…

… while white rice and shoestring potatoes are the most usual sides in Brazil.

… this time we made it in the slow cooker.

Unlike a regular pan, the stew can cook by itself for hours in the slow cooker.

Just set the timer, and relax!

Dinner will be ready within 4 to 8 hours,  hassle free. 🙂 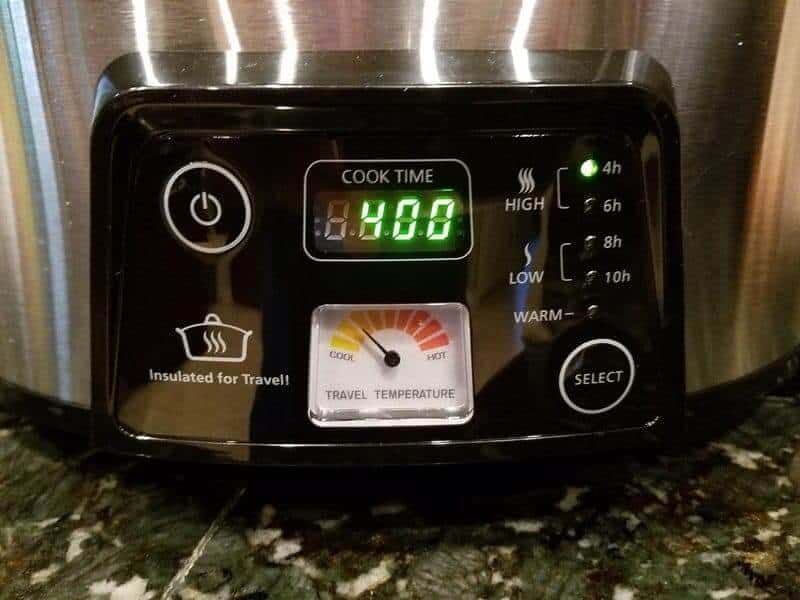 Can You Freeze Beef Stroganoff?

Yes! You can freeze beef stroganoff with sour cream or cream cheese for up to 3 months. Thaw in the fridge and heat gently, stirring well.

What to Serve with Healthy Beef Stroganoff?

It goes weel with:

I hope you enjoy our Crock Pot Beef Stew as much as we did…and also take a look at other low carb, gluten-free and  slow cooker recipes. 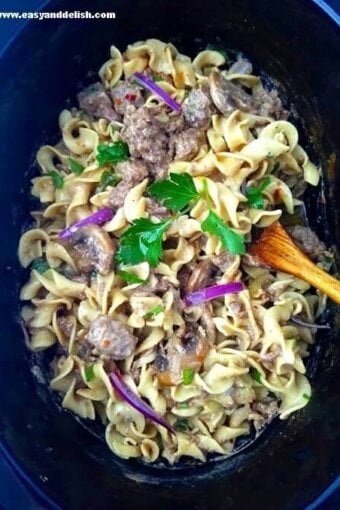