Published: Jun 22, 2020 · Modified: Apr 29, 2021 by Denise Browning · "This post may contain affiliate links which won’t change your price but will share some commission." · 5 Comments 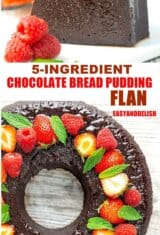 Chocolate bread pudding is an easy and delish baked dessert made with only 5 ingredients: stale bread, milk, eggs, sugar and cocoa powder. You will fall in love with my Brazilian Chocolate Bread Pudding Flan Recipe, which comes from my NEW COOKBOOK, The Complete 5-Ingredient Cookbook. With just the right amount of sweetness and rich chocolate flavor, this smooth and creamy dessert will be your new favorite! (with VIDEO) 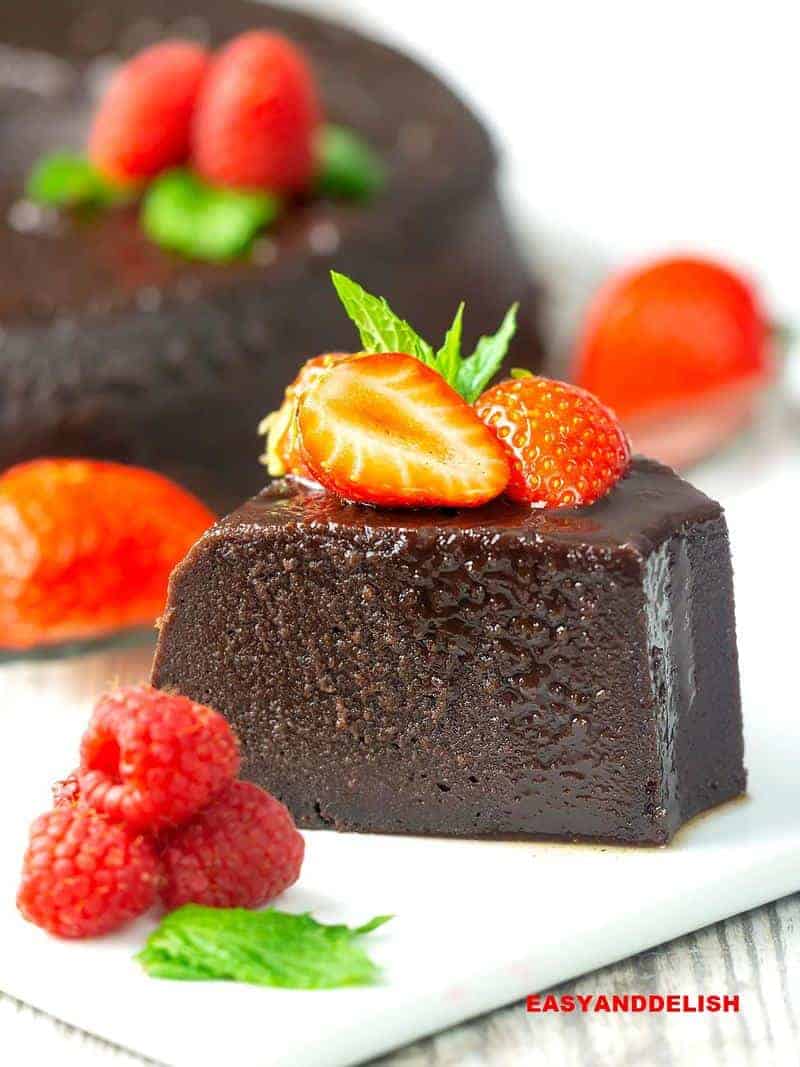 Bread pudding as we know it can be traced back to the 12th century. It was likely a dish born out of need, as it was a great way to use up stale bread and make it more palatable. In 13th century England, bread pudding was known as the “poor man’s pudding” because it was usually eaten by the lower classes. As with many of our favorite comfort foods, this dish that was once looked down upon as simple food for “peasants,” is now a beloved tradition.

Brazilian bread pudding is much smoother in texture than most others, which are more chunky. We bake the dessert in a Bundt pan with a caramel glaze. When you turn the baked bread pudding out of the pan onto a serving plate, the delicious caramel coats the pudding, much like a flan. It is heavenly!

In short, this is not your old-fashioned bread pudding!

What is a Bread Pudding Flan?

Very simply put, bread pudding flan is a fusion of bread pudding and flan. It is baked in the oven using a bain-marie and has the delicious caramelized glaze.

You’ll find my chocolate bread pudding recipe to be smooth and creamy with a texture similar to a flan, although denser and firmer. It also has a bittersweet chocolate flavor!

As you can see, it is different from its American cousin, which has a chunky texture and doesn't have that caramel glaze cascading down the sides.

This recipe for chocolate bread pudding comes from my new cookbook, The Complete 5-Ingredient Cookbook. The cookbook contains so many wonderful recipes that you can take advantage of daily. Here’s what is included:

BONUS: If you are an overwhelmed parent, you’ll find these recipes are super-fun to make with your kids!

The Ingredients and Possible Substitutes

How to Make the Chocolate Bread Pudding Flan with 5 Ingredients

Watch the video for complete instructions! 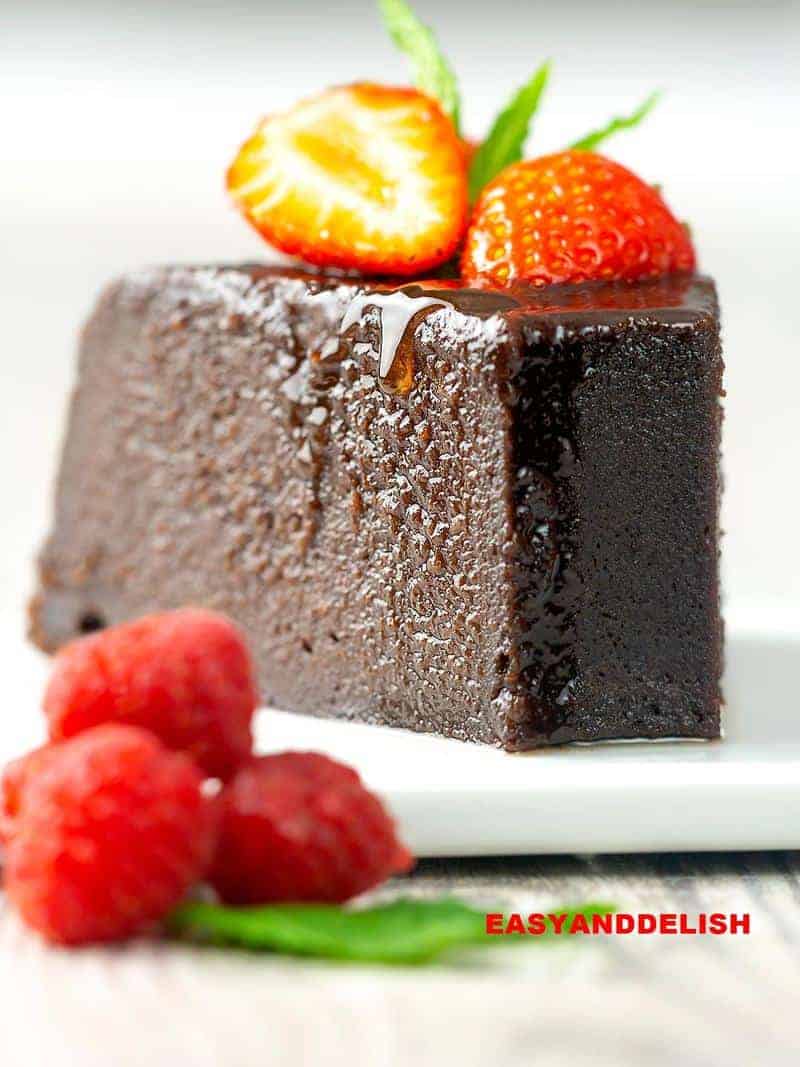 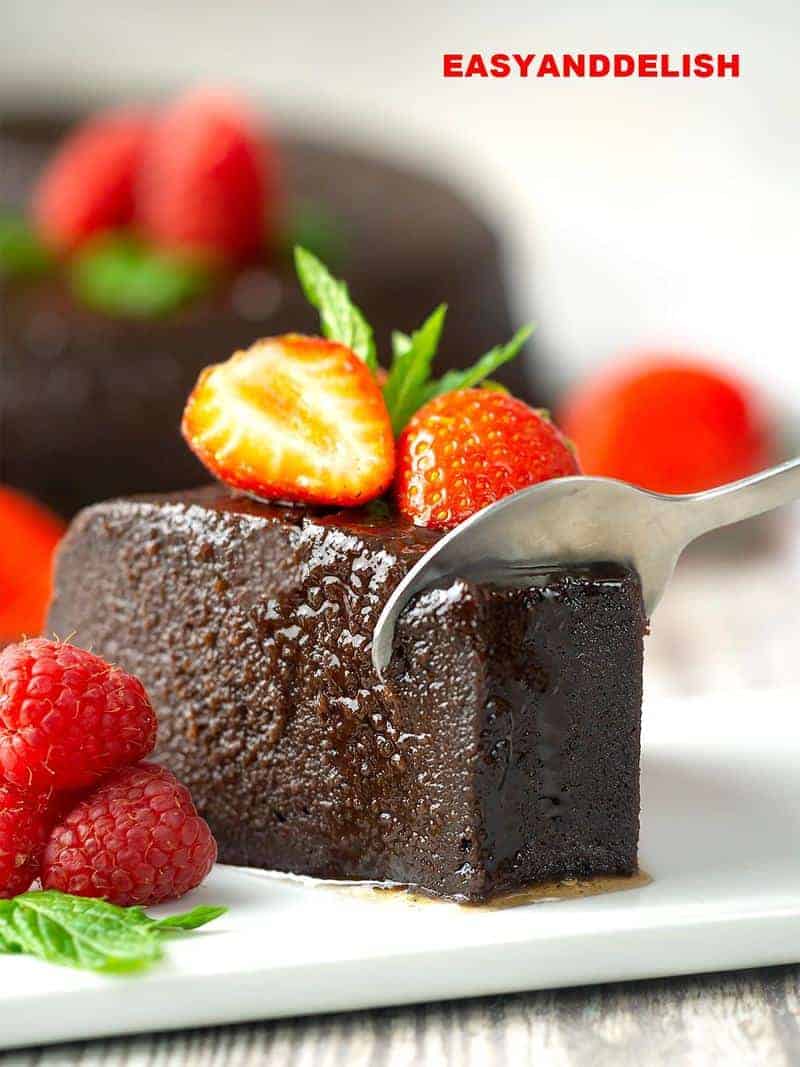 You can choose to serve the chocolate bread pudding warm or cover it and chill it in the refrigerator to serve cold.

Here are some optional garnishes for serving your bread pudding flan:

Make-Ahead Instructions and How to Store

To make this dessert ahead of time, follow all of the steps to make the bread pudding flan as usual. Once it is fully baked and has cooled for 15 minutes, unmold it and cover to keep in the fridge until you’re ready to serve. It will stay fresh in the fridge for up to 3 days.

On the other hand, don't freeze it because freezing will alter the creamy texture. 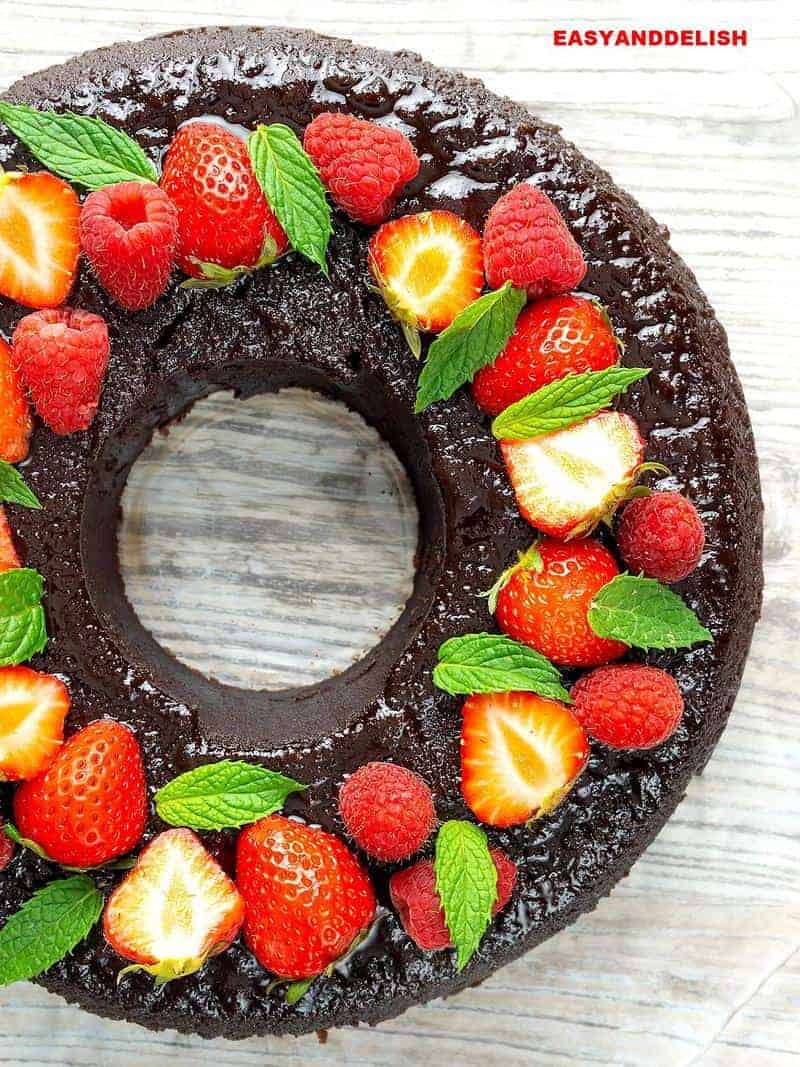 Don’t forget to order your copy of The Complete 5-Ingredient Cookbook for 175 easy recipes, all made with just 5-ingredients! 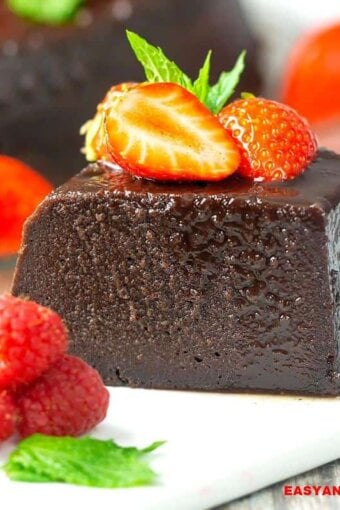 “Bread pudding is a comfort food in many places across the globe. Brazil, my home country, has its own version. Unlike its American cousin, it’s baked in a Bundt pan and has a smooth rather than chunky texture –more like a flan. Also similar to a flan, Brazilian bread pudding has a glaze of caramel sauce cascading from top to bottom once unmolded. This recipe is flavored with chocolate and has a balanced bittersweet flavor. It’s pure indulgence!” The Complete 5-Ingredient Cookbook by Denise Browning, page 238-239.
Course:Dessert
Cuisine:Brazilian
Keywords:baked dessert, bread pudding flan, chocolate bread pudding, dessert recipes
Prep Time 10 minutes
Cook Time 50 minutes
soaking and resting 35 minutes
Total Time 1 hour 35 minutes
Servings 12
Calories307 kcal
Author Denise Browning
Cost $ 0.50 per slice 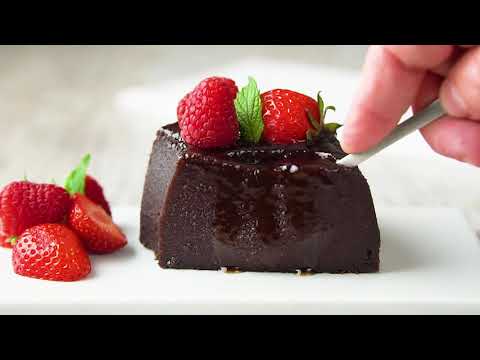 OPTIONAL GARNISHES: Here are some optional garnishes for serving your bread pudding flan: Make-Ahead Instructions and How to Store To make this dessert ahead of time, follow all of the steps to make the bread pudding flan as usual. Once it is fully baked and has cooled for 15 minutes, unmold it and cover to keep in the fridge until you’re ready to serve. It will stay fresh in the fridge for up to 3 days. On the other hand, don't freeze it because that will alter the creamy texture.

DID YOU MAKE THIS RECIPE?Comment and rate the recipe. Also follow us on Pinterest at @easyanddelish for more delish recipes.
« Bife à Cavalo (Steak and Eggs Recipe)
Homemade Peanut Butter Cups Recipe (2 Ways) »