Acai Bowl (or "Açaí na Tigela" in Portuguese) is a Brazilian dish that features the pulp of the acai berry. In its native Amazon region, this often comes as fresh açaí fruit purée. Away from its source, acai usually comes as the frozen pulp. The pulp in açaí bowl looks like a thick cream or smoothie in a bowl. This can be either sweet (the most popular form) or savory. 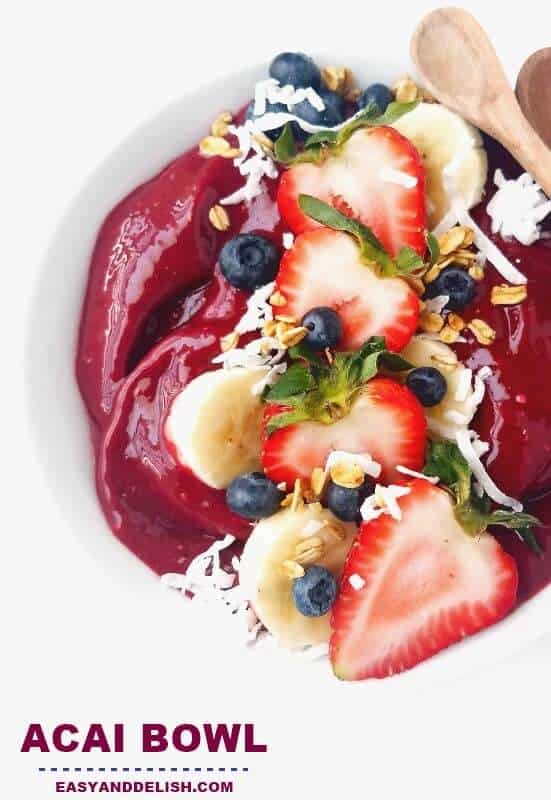 The main ingredient is açaí berry, either processed and frozen, or freshly pressed, with either a thin, medium, or thick texture, depending on how much water is added.

What is Acai Berry (or Açaí)?

Açaí (pronounciation Ah-sa-YEE) is an inch-long deep purple berry that looks like a large blueberry.

Acai berry comes from the açaí palm tree (Euterpe oleracea), which is native to Brazil, Colombia, Venezuela, Suriname, and Trinidad and Tobago. It's mostly found in the Amazon Region, where natives and river dwellers have enjoyed it in the form of a pulp or purée for centuries.

The açaí palm, which has multiple (5 to 25) stems, occupies most of the floodplain forest of the region. Besides the açaí berry, it is also an important source of heart of palm (palmito).

These depend on whether the açaí bowl is savory or sweet. To make the most common variety, the sweet acai bowl, one blends the pulp with guaraná syrup and adds sliced bananas and granola as toppings.

In its raw form, açaí berry has an earthy, grassy flavor. But once it undergoes processing, many describe the taste as a strong blend of chocolate and berries.

Açaí bowl is a hit all over Brazil, which produces up to 85% of the world's supply of açaí. But it is especially in demand in Pará, Rio de Janeiro, Santa Catarina, São Paulo, and Goiás States, and along the northeastern coast. You can find it for sale at beach and shopping mall kiosks, gyms, and juice bars throughout the country. Grab-and-go açaí bowls are also available in the freezer sections of many bakeries.

The frozen pulp is available in the frozen food aisles of supermarkets like Sprouts and Whole Foods. Dole also now makes a ready-to-eat açaí bowl, available at Walmart, ShopRite, Wegman's, Stop&Shop, and other markets. In addition, many juice shops in the USA now offer açaí bowl.

To the surprise of many, açaí bowl can be either savory or sweet, depending upon regional differences.

The savory açaí bowl, served in Northern Brazil, is salty, sometimes mixed with manioc flour, and has shrimp, dried fish, and tapioca pearls as toppings. Most stands and shops that sell savory açaí bowl use cylindrical machines (“açaí beaters") to produce the pulp from the fresh berries. The fresh pulp is not pre-sweetened or frozen.

In contrast, the sweet variety, mostly common in the rest of Brazil, contains either sugar or guaraná syrup, banana, granola, and other fruits. This acai bowl recipe shows how to prepare the authentic dish. Mall kioks may also add a drizzle of sweetened condensed milk or melted chocolate as toppings for açaí bowl .

In Northern Brazil, savory açaí bowl is a staple that people consume any time of the day, especially at lunch and dinner time. A meal just wouldn't be a meal without it. The sweet version is less common to encounter, except for sweet treats like açaí ice cream, candy, and tarts.

In the rest of the country, you can find sweet açaí bowl for breakfast, snack time, and before/after exercising.

The açaí berry comes from the wild-grown açaí palm trees in the Amazon River basin.

The next step is washing and then soaking the ripe berries in water to soften the thin outer skin.

In the old days, the açaí berries were then pressed and the large seeds strained out to produce a dense purple liquid. Nowadays, the latest technology comes into play to make açaí purees.

Right after the pulping process, açaí purees are pasteurized, either sweetened or not, and then quickly frozen to preserve açaí 's nutritional properties.

Acai berry is highly perishable and so has to receive processing within 24 hours of harvest. Except for locals who benefit from the fresh form, açaí is only available in other parts of the world frozen or in powdered form.

After blending the pulp with other ingredients, it's best to consume it right away.

Açaí in the Amazon Region

Açaí has been a staple food in the Amazon region for centuries. The first records date to the European colonial period, where soldiers, clerics, naturalists, and politicians made reference to a native drink made from açaí palm.

As far back as 1661 the Jesuit missionary Bettendorff recorded that palm trees, especially the açaí palm, had usefulness to the dwellers in the North of Brazil. They were sources of food, medicine, materials to build their houses, clothing, utensils, and weapons.

Açaí is still an essential part of the diet in the state of Pará, which is the largest producer. In certain areas around the Amazon rainforest, the daily intake of açaí is even higher than milk.

In fact, in the large capital city of Belém in Pará State, some people drink up to 3 liters of açaí per day. Eastern Amazonian infants may start to drink açaí juice as early as six months of age. Amazonians consider açaí bowl to be a heavy dish, best for eating at lunch or dinner time, and requiring a nap afterwards.

Popular legend of its discovery

There are many legends about the açaí palm. One of the most popular tells of a large Tupi tribe that lived on the banks of the Amazon at the future site of the city of Belém.

The tribe's growing population meant that there wasn't enough food to go around. Therefore, the tribal chief, Itaki, issued an order to sacrifice all newborns until a new food source became available. This meant that even his pregnant daughter Iaçã would have to give up her child.

She cried for days after losing her baby, and prayed their god would reveal another way to save the tribe from hunger. One night she heard a child's cries and saw her infant at the foot of a palm tree. She reached out for the child, but the infant disappeared. She collapsed on the palm in tears, and died there of a broken heart.

At daybreak, the other members of the tribe found her body embracing the trunk of the palm, her face now serene and smiling. Her eyes stared up into the crown of the palm, which they saw was heavy with açaí berry.

They climbed the palm and picked the berries; they had found the answer to their prayers for a new food source. Chief Itaki lifted his decree, and named the berry açaí, which was his daughter's name in reverse.

Açaí Spreads to Other Parts of Brazil and the World

Açaí started becoming popular outside the Amazon region when it came to light that the pulp holds its nutritional value if you freeze it soon after processing.

Soon northern Brazilians began bringing it to the southeastern city of Rio de Janeiro in the 1970’s and 1980’s.

The people of Rio, famous for their active and healthy lifestyle, found the mixture of açaí and another Amazon treasure, guaraná, to be great for boosting energy. They used the two to create the famous sweet version of açaí bowl (açaí na tigela): a delicious combination of açaí, guaraná, fresh fruit and granola.

This style of açaí quickly caught on with the body conscious, sports athletes, and surfers. By the mid 1990’s, açaí had firmly entrenched into Rio’s beach culture, with nearly every corner bar, gym, and beach stand offering it for sale.

Today, açaí is enjoyed throughout Brazil, and its consumption is now a part of Brazilian culture. After 2000, açaí began appearing more often in other countries around the world:  the USA, Japan, and some European countries.

Açaí received the name "superfruit" because of its many benefits. It may help support muscles, the heart, digestion, and even one's energy levels.

That is why many consider açaí bowl to be a healthy dish.

To sum up, acai berry is a nutritious fruit with a long history in Brazil, which has caught on in the rest of the world. It is scrumptious both savory or sweet, and can be a tasty part of a healthy lifestyle.