Published: Jul 10, 2022 · Modified: Jul 18, 2022 by Denise Browning · "This post may contain affiliate links which won’t change your price but will share some commission." · 9 Comments 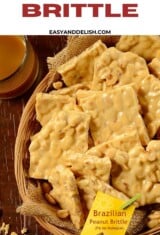 Homemade peanut brittle (Brazilian-style) is similar to the American peanut brittle recipe, except it is nuttier and more buttery. The addition of baking soda helps to crack it nicely even when it is made in hot and humid weather.

The June Festivals (Festas Juninas) is already underway in Brazil... and Father's Day will take place this Sunday. Brazilian Peanut Brittle, known as  Pé de Moleque, was our pick to make these two dates great. It is simple to make yet is sweet, nutty, buttery, and hearty... a true party for the mouth!

This brittle is a typical treat during these Brazilian folk parties...

The Brazilian homemade peanut brittle is similar to the American recipe, although nuttier... and this specific recipe is quite a bit more buttery. It has more peanuts and, of course, lots of butter, which gives the blond color to our brittle.

There are many versions of Pé de Moleque (Brazilian peanut brittle) -- with differences in ingredients, color (ranging from blond to a deep dark caramel), and cut/shape.

In addition, baking soda was also added to our recipe to make the brittle crack nicely even in hot and humid weather like we have been having lately in Texas.

If you are planning an authentic festa junina, make our Brazilian peanut brittle, as well as some corn dishes such as:

Make sure to dance quadrilha to the lively sound of forró music beneath a tent brightly decorated with colored flags and sky lanterns.

And don't forget the fireworks!

Now then, if you would love to treat Dad like a king, present him with this super delish brittle and serve him some of these 20 guy-pleasing dishes.

Wishing all of you a fun festa junina... and to all our Dads a very HAPPY FATHER'S DAY!

What is a Brazilian Peanut Brittle?

Known in Brazil as “pé de moleque” (literal translation: ragamuffin’s foot), it is a typical Brazilian candy made with roasted peanuts and jaggery, which originated in the mid-16th century, with the arrival of sugarcane in Brazil.

There are at least 2 theories regarding the origin of its name, as follows:

However, there is also the pé de moleque cake (or ‘black cake’), which is served in the Northeastern region during the June festivals. It is made with cashew nuts instead of peanuts, and also a type of fermented cassava flour and jaggery.

The classic Brazilian homemade peanut brittle recipe was based on a recipe brought by the Arabs to the Italian and Iberian Peninsulas in the Middle Ages, originating:

How to Make Homemade Peanut Brittle

Store this homemade peanut brittle candy in a large plastic bag or airtight container in a cool place for up to 2 to 3 weeks.

Brazilian homemade peanut brittle is similar to the American peanut brittle recipe, except it is nuttier and more buttery. The addition of baking soda helps to crack it nicely even when it is made in hot and humid weather.
Course:Dessert
Cuisine:Brazilian
Keywords:peanut brittle, quick recipe
Prep Time 15 minutes
Cook Time 15 minutes
Total Time 30 minutes
Servings 24
Calories182.4 kcal
Author Denise Browning
Cost $ 0.10 per person

There are many different versions of Pé de Moleque (Brazilian peanut brittle) -- with differences in ingredients, color (ranging from a blond to a deep dark caramel), and cut/shape. Our is blond because it incorporates more butter. Baking soda was also added to the recipe to make the brittle crack nicely even in hot and humid weather.   STORAGE Store this peanut brittle candy in a large sealable plastic bag or airtight container in a cool place for up to 2 to 3 weeks. Do not freeze!

« Cassava (Yuca): What is, Health Benefits, How to Cook It, and More
30 High-Protein Dinners »